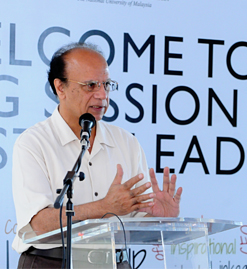 BANGI, 20 October  2014 – Islamic Banking and Finance (IBF) is becoming more acceptable even in Non-Muslim countries as it has generated widespread interest in the West and major international banks have started offering Islamic products.

Visiting Fulbright Scholar at The Malaysian American Commission On Educational Exchange (MACEE) Associate Professor Dr Jamshed Yunas Uppal said the growth of Islamic banking and finance over the last four decades has been phenomenal and had caught the attention of Western banks.

He was giving his inaugural public lecture on “Islamic and Western Finance: Shall The Twain Meet?” at The Graduate School of Business of The National University of Malaysia (UKM) here today.

Dr Uppal said some Western economists have even suggested that Islamic finance may provide financial instruments superior to the debt-based conventional banking.

He said part of the reason for the positive views towards IBF could be that it is increasingly becoming like mainstream banking systems.

He cited the Syariah-compliant Mudarabah which is increasingly similar to equity financing rather than debt financing, as an example.

Islamic Financial institutions have developed innovative securities to circumvent the prohibition on Riba or Usury, among these are profit/loss based Mudarabah.

In Mudarabah the loss of investment, if any, is suffered by the investor only, because the manager of the funds does not invest anything. His loss is restricted to the fact that his labour has gone in vain and his work has not brought any returns to him. However, this principle is subject to a condition that the manager had worked with due diligence which is normally required for the business of that type.

The important implication is that the cost of capital is higher for companies which are compelled to substitute debt securities with Mudarabah.

In another example, the Sukuk – which is commonly referred as the Islamic equivalent of bonds – is becoming more like conventional bonds to even some Syariah banking researchers.

In principle Sukuk – as opposed to conventional bonds, which merely confer ownership of a debt – should grant the investor a share of an asset, along with the commensurate cash flows and risk.

Dr Uppal said many islamic scholars view the Islamic banks’ use of markup financing as not strictly ‘Islamic’.

Short-term instruments and consumer financing has increased over the last decade but Islamic banks have over that period departed away from the ideal of the Islamic bank.

“It seems to be a rational response in the face of problems of asymmetric information and incomplete contracts,” he said.

In Malaysia, there is a hope that Islamic banks would help the under-developed sectors of the economy, like agriculture and fisheries. However, he concluded that such an objective has yet to materialise. Most loan instead go to credit card payments, mortgages, purchase of cars and personal financing.

He said it may be inferred that while international financial markets are viewing and pricing the Sukuk in a manner similar to conventional bonds, Syariah-compliant advocates may see it as diverging from Islamic principles.

The question is how far the divergence between the economic reality and the domestic image is maintainable? In the final analysis it becomes an issue more of brand management and framing rather than of economic substance, Dr Uppal said.