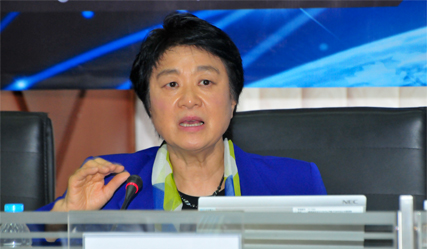 BANGI, 21 October 2014 – Gender is no barrier to being a successful astronaut and being female does not make any difference to becoming one.

The first Japanese woman astronaut Dr Chiaki Mukai, who is also the Director of the Japanese Space Exploration Agency’s (JAXA) Centre for Applied Space Medicine and Human Research (J-CASMHR) said she do not feel that gender makes a difference.

Dr Mukai, who broke gender boundaries when she logged in the most hours in space by spending over 566 hours there, was sharing her experiences with Malaysian scientists at the ‘UKM in Space’ programme here today.

The programme was organised by The National University of Malaysia (UKM) to commemorate the seventh anniversary of Malaysia’s journey into space.

Dr Mukai who received the ‘Prime Minister’s Special Citation for Contributions to Gender Equality’ among many others conferred on her, asked women everywhere not to let their gender stop them from achieving their dreams saying “if you can dream it, you can do it”.

While most of the astronauts dreamt of being one since childhood, Dr Mukai, a cardiovascular surgeon, did not.

She said growing up in a small village didn’t give her much opportunity to be exposed or even dream of something she described as “out of this world”.

Dr Mukai was 32 when she read a news report about Japan’s recruitment plan for the first group of the nation’s astronaut. Although she was already highly accomplished having released at least 60 publications, she was in the mindset that those seeking to be one needed to be “a strong man and a pilot from the military”.

Nonetheless she decided to apply as her desire to be part of the historic event grew day by day and after years of waiting and training, she got to fly into space, not once but twice.

“Being in space was the most wonderful thing I have experienced and despite assumptions that women are not strong enough to endure the vigorous physical and mental training, at least 54 women have done so,” she said.

“I came to know of the space exploration programme when I was 17 and the media was buzzing with news of astronauts Neil Armstrong and Buzz Aldrin landing their spacecrafts on the moon.

“I was amazed by the events but did not think too much of them as those amazing happenings were only taking place in the big countries. Japan at that time did not even have a space programme.”

Dr Sheikh Muszaphar said while at the International Space Station, he carried out experiments on bacteria and those related to liver cancer, leukaemia cells and microbes aimed at advancing science and medical research.

Although seven years have passed since he made the journey into space, the experience of being inside the International Space Station (ISS) still feels like “it was just yesterday”, he said.

The orthopaedic surgeon said he dreamt of becoming an astronaut since the age of 10 and although it took 25 years to realise his ambition, he thanked his “lucky stars” for the opportunity.