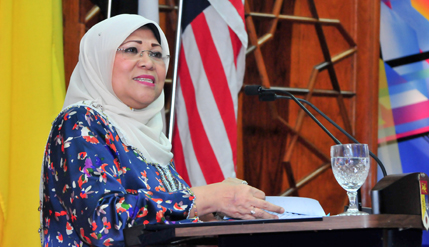 BANGI, 8 October 2014 – The National University of Malaysia (UKM) will provide expertise in child abuse treatment, intervention and prevention to the Women, Family and Community Development Ministry via the Social Welfare Department (JKM).

A Memorandum of Understanding (MoU) was signed here today on the smart partnership which includes designing modules for child protection and organising workshops and seminars for JKM staff while JKM will help to collect data on such cases for UKM researchers.

The MoU which takes effect for three years enables UKM and JKM to share their resources. As an example, the department may use the facilities at the Psychology Services and Counseling Unit and the laboratories of child development and stress management in UKM.

Earlier, Datuk Sri Rohani in her closing address at the 2014 National Level Seminar on Child Protection jointly organised by UKM and JKM said that a Child Online Protection Action Plan will be formulated within this year to control the use of digital devices and Internet access among children.

She said the Child Act 2001 may have to be amended because up to 70% of the provisions and clauses needed to be updated to deal with various harmful online phenomena targeting children under 18.

“Apart from cyber-bullying, trolling and pornography, it has come to our attention that a new alarming move has surfaced that encourages children to run away from home, harm themselves and even commit suicide,” she revealed.

She said amendments to the act will make it mandatory for parents or guardians to monitor their children’s online habits and install software and hardware to block cyber predators.

She called on parents to be wary about what their children do in their privacy saying that parents should be more pro-active and take preventive measures such as installing close-circuit televisions in their rooms.

She said various departments, including universities and the Malaysian Communications and Multimedia Commission (MCMC) are being consulted to look at existing laws for review.

Starting next year, a security-oriented software will be introduced so that parents can install it in their children’s computer or mobile devices to properly control the digital material accessed.

At the seminar, a total of 11 resolutions were submitted to JKM and UKM on tighter enforcement of child protection laws in both the urban and rural areas.

In addition to the monitoring and control of the use of digital devices and Internet access, other resolutions, including the implementation of policies on children’s rights should be enhanced through advocacy and mass media, enhancing social support systems of children and informal education programmes that emphasise social interaction.