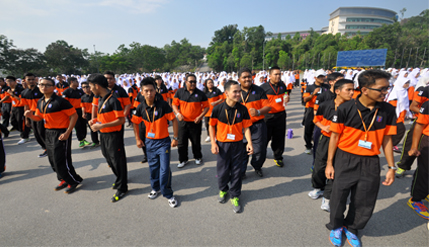 BANGI, 2 September 2014 – A mixture of aerobic exercises and dancing along with performances from the uniform units followed by a tour of the campus started off the second day of orientation week for new students of The National University of Malaysia (UKM).

Just over 4,000 students completed their registration yesterday into the 11 residential colleges which will now be their new homes.

The students wearing their new t-shirts with the official colours of their residential colleges took part in exercises joined by Vice Chancellor Prof Datuk Dr Noor Azlan Ghazali for some 10 minutes before he left for a meeting.

The students were divided into three groups for their activities at three locations; the rugby field, the area near the lake in front of the Faculty of Engineering and Built Environment and the Dataran Gemilang.

They were joined by Deputy Vice Chancellors Prof Datin Noor Aziah Mohd Awal (Student and Alumni Affairs) and Prof Ir Dr Riza Atiq OK Rahmat Abdullah (Academic and International Affairs) and Heads of all the Residential Colleges as well as lecturers and other officers.

The new students were later taken on a tour of the campus grounds to familiarise them with various locations there.