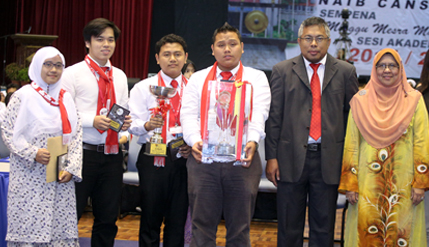 They beat the Tun Dr Ismail Residential College team from Kuala Lumpur in the final on the subject “Malaysian Women are still not free” a subject seen to be very much relevant even today where gender bias is still prevalent.

The winning team consisted of Muhammad Fikri bin Isnin from the Faculty of Social Sciences and Humanities (FSSK), who was also named Best Debater, Siti Nurfatehah binti Radzi from the Faculty of Science and Technology (FST) and Eric Abdul Rasyid bin Kamarulzaman and Luqman Nurhakim both from FSSK.

They took home the Vice Chancellor’s Cup and received individual trophies, certificates of participation and tokens of appreciation.

The winners received trophies and certificates of participation. All the prizes were given out by Deputy Vice Chancellor (Students and Alumni Affairs) Prof Datin Noor Aziah Mohd Awal.