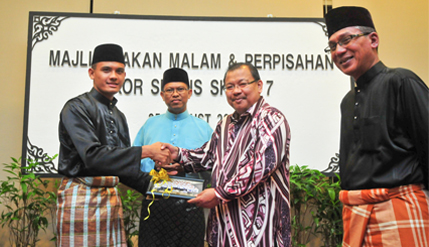 A total of 51 of the 57 cadets including 31 girls from the Squad 7 graduating class attended the official ceremony held at University Technology Mara (UiTM) yesterday to receive their commissions. They were today feted to a farewell dinner at the Bangi–Putrajaya Hotel here where they were given their certificates.

UKM Vice Chancellor Prof Datuk Dr Noor Azlan Ghazali, who is the SUKSIS Commandant presented their certificates at the dinner saying that he was proud of their achievement in getting their commissions.

He hope they will continue to uphold their vows as part of the police force to uphold the law and serve the people while continuing their studies in UKM.

He reminded those who will graduate later this year to re-evaluate their standings in life once they step foot out of campus and into the real world.

“You must see, where you were when you first walked into UKM and where you are going once you graduated. You must know what your value is to the people. What do you bring that is different, that they will need so badly, that they must hire you.” Prof Noor Azlan said.