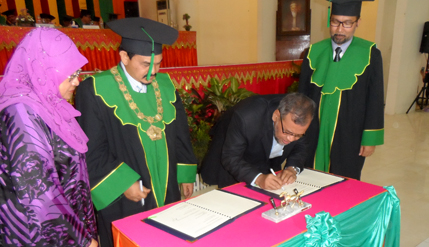 BANDA ACEH, INDONESIA 28 August 2014 – The National University of Malaysia (UKM) and the Ar-Raniry State Islamic University (Ar-Raniry UIN) of Indonesia are to cooperate in various fields of studies including research and student exchanges.

A memorandum of understanding (MoU) was signed here today between UKM and UIN in the areas of teaching, publication and student exchanges as well as programmes for the benefit of their local communities. It was signed just ahead of UIN’s 2013-2014 session convocation at Ali Hasjmy Auditorium in Banda Aceh.

Prof Mohd Yusof said UKM and Ar-Raniry UIN had worked together previously in research and postgraduate exchanges but the MoU will expand their cooperation to other fields.

He said the cooperation includes exchange of students between the two campuses, academic exchange including their teaching staff and exchange of academic publishing which had been agreed to as well as collaborative research to be published in the form of academic works and cooperation that would enhance the quality of the two universities.

He said this included collaborating with other foreign institutions and reputable organizations. “Such events are implemented gradually and we will continue to do so in the future,” Syamsul Rijal said.

After the signing ceremony, a total of 620 graduates received their degrees; one doctoral recipient, 78 Masters, and 541 Bachelors degree.