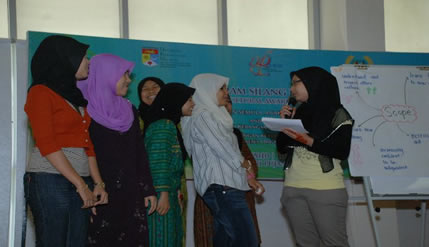 The programe involved the Women’s Association of UKM (SUKMANITA) and The National Council of Women’s Organisation (NCWO).

What was carried out under the programme was different from the foster children programmers with students living with foster parents of the same race and professing the same religion in the kampungs.

NCWO President who is also the Vice Chancellor of UKM, Tan Sri Prof. Dr Sharifah Hapsah Syed Hassan Shahabuddin, who was present at the  sending off ceremony last Thursdday (July 29, 2010) advised the students involved to make full use of the opportunity to learn about the different cultures and sensitivities of the various people of the country.

She reminded them to use English when speaking to their foster families to help them sharpen their usage of the language.

The first such programme was launched in May 2009 and involved the female students and committee members of SUKMANITA.