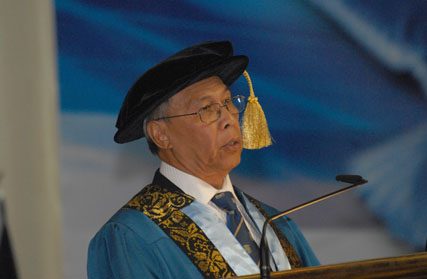 BANGI, 9 August 2010 – Recipient of the Honorary Ph.D degree for Arts of Universiti Kebangsaan Malaysia (UKM), Dato’  Johari Salleh is confident that the national university has the potential and responsibility to build up the corpus for the study of the music of the Malay world.

Due  to the lack of terminologies and Malay language books on music, he said it was probably time that the university enhanced its teaching of music.

He said this in his acceptance speech when receiving the honorary doctorate at the 38th UKM Convocation  here today.

Johari who is a leading composer and conductor in the country said, ”Realising the importance of music to society, UKM has taken concrete measures to offer a Bachelor’s degree in Music Management and Study, which is in the final stages of implementation.”

” The components of music study and management, including accounts, marketing, entrepreneurship and law are the mainstay of this programme.”

Dato’ Johari said this programme would not only produce professionals in management, research and musical technologies but also the people with the fertile mind to raise to a higher level the position and dignity of the culture and music of the nation and the Malay world, Nusantara.

”It is probably due to certain factors that this plan has yet to be realised. With all the humility I hope that this programe for music study which will uphold the worthiness of UKM as the national university, would be realised.

”To my mind, UKM by pooling the various expertise together, has the best potential to create a unique, comprehensive programme of music study that has the ability to meet the continuous changes of time,” he said.

He said Dato’ Johari had composed many masterpieces for  symphony orchestras and they were performed by the big orchestras like those from from Spain, the Orkestra Sinfoni Kebangsaan Malaysia, and the Kuala Lumpur Symphony Orchestra.

On 22 May 2010, Dato’ Johari was entrusted with the task of arranging  the music and conducting the Royal Ochestra of UKM at the Dewan Canselor Tun Abdul Razak.

He was born on 9 February 1940, to Puan Munarah Shuib, of Singapore and Mohd Salleh Bin Mohamad of Melaka. Raised in Singapore, he had his early education in English school.

The first two decades of his life was most interesting and if there was a hypothesis that the success of the first 20 years of a person would decide that person’s success for the next 50 years, then Dato’ Johari could be its model, said Asso Prof Dr Kadderi.

Even before he reached 20 years of age, Dato’ Johari had exhibited his talent and chalked up success. From 1953, he received musical lessons and  composition from his father, besides a well-known musician by the name of Saaban Saliman. 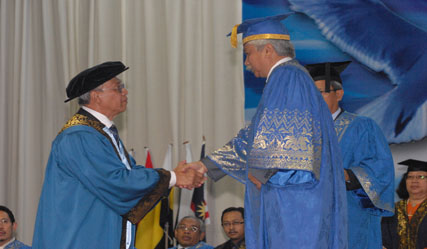 In 1966, he was made the conductor of Orchestra RTM and in 1968, he obtained his Diploma in Music (Composition and Arrangement) from the prestigious Berklee College of Music, Boston, USA

The diploma was an international recognition for the musical talent of Dato’ Johari.

His musical talent has always been recognized and appreciated, just like in 1986 when he was entrusted with the task of composing a corporate song as a special gift to UMNO and his composition “Bersatu, Bersetia, Berkhidmat” is still in use today.

His subsequent career was as Director of the Kuala Lumpur  Orchestra from 1988 to 2000 and then as musical consultant for Dewan Bandaraya Kuala Lumpur from 2001 to 2004.

He was appointed the Principal Fellow of UKM’s Cultural Centre from 2004 to 2008, when he was given the responsibility to re-arrange the national anthem, NEGARA KU.

At present, Dato’ Johari is serving as a Senior Fellow at the Students Development Centre of UKM and he has composed the song “Mengilham Harapan Mencipta Masa Depan” for UKM this year.