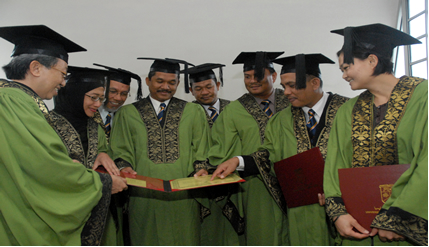 BANGI, 10 AUGUST, 2010 – The fight against corruption has been given more bite with eight officers getting their Master’s degree in Corruption Studies from Universiti Kebangsaan Malaysia today.

Each of the graduates carried out detailed studies on every aspect of corruption dan learned more about the scourge. Is it hoped that their studies, analysis and visits to a foreign country will make them better equipped, more analytical and capable while being more sensitive when carrying out their duties. This is the first such programme here.

Jamil, 43, served the Malaysian Anti-Corruption Agency for 20 years and came back to UKM after studying for his bachelor’s degree in business administartion.

The task of fighting corruption is always attractive to him as his father is a former soldier who instilled disipline in his son. For this thesis Jamil wrote about the various programes formulated by SPRM to fight corruption and hoped the commission would be given responsibility of prosecution.

He, however, admitted that in every prosecuting case, they must not be any doubt and every case should be ‘water-tight’.

Nor Yatimah, 43, who possessed a diploma in public administration is now pursuing a bachelor’s degree in juirspudence resolved to fight corruption in the country.

She wrote a thesis – Roles and functions of whistle blowers: Case studies especially in combating corruption.

Whistle blowers, she said, is a concept with regards to efforts to expose malpractices, misconduct, practices and/ or omission and not lawful which happened in an organisation.

With this regards the sincerity of the informer to expose corrupt practices of someone is very important to expedite investigation.

Nor Yatimah felt everybody should hate and feel ashamed in being corrupt in order to ensure our country is free from corruption.

One of the subject in their studies is benchmarking which requires them to go to Singapore to study how the Police Force, Capital Land (a GLC company) and the CPIB, the agency which investigates corruption in the republic helps the goverment there to fight corruptices.

Zulkefle, 43, told how the former Prime Minsiter of Singapore, Lee Kuan Yew willingly allowed the CPIB to investigate for wrongdoings in their purchasing their houses in the Orchard Road area a few years ago.

Investigations continued despite the fact taht the Prime Minister then, Goh Chok Tong was not that happy with the episode. The CPIB investigations showed no wrongdoings on the part of both Lee and his son, the Deputy PM at that time.

Zulkefle who got his Bachelor of Bussiness Administration degree from Ohio University United State wrote his master’s degree thesis on The Motive of Informers Cooperate with SPRM: A case study.

Assistant Superintendant of Police, Liong Sau Lai, 34,felt that the people will be more confident and support efforts to eradicate corruption when leaders give undivided support and will not compromise.

For an officer who had served the force since 2000, Liong refuted any suggestion that policemen are easy to bribe.

“It this is true most of them should be rich but they are still as they are today with small pay and are not prosperous,’ said the wife of a businessman who wrote a thesis on – PDRM and corruption among the lower ranking policemen.|

Rosdi Hassan, 46 and his colleague Abdul Muneim , 40 felt that corruption were still condoned by some and it eradication needed the co-operation of all if it was to succeed. Rosdi obtained his first degree in education from Universiti Pendidikan Sultan Idris in 1998. His thesis was – ‘Searching for information concerning corruption:  ‘Exploratory study among investigating officers in the investigation division  SPRM Headquarters, Putrajaya’.

Muneim who had served SPRM for 13 years wrote his master’s thesis on – ‘Procedures in seizing assets according to the SPRM Act 2009’.

Halim Yaacob, 46 is now more confident in his work at the Police College, Cheras.  Halim who is the Head of Religious and Counselling wrote on –‘Controlled Scheme on Discipline and Drugs: The role of Supervisors towards Subordinates’.