UKM are Champs in the Anti-Crime Inter-Varsity Debate 2010 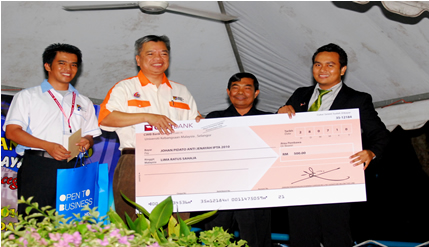 He took to the floor, speaking on “Character Building of Undergraduates is the Answer to Crime.”

The second place went to Mohamad Azri Naim Mohd. Kamal of Universiti Sains Malaysia (USM) who argued that “the Undergraduates are prepared to Face Moral Crime” while the third place was won by Amirrudin Abdul Rahman of Universiti Putra Malaysia (UPM) who took the line that “The Rise in Crime is Proof of Failure in Character Building.”

The champ took home a RM500 prize, the second place, RM300 and the third place, RM150. The other participants from the other public institutions of higher learning (IPTA) received a consolation prize of RM100 each and a certificate of participation

The champ Mohd Khalis had argued that it was crucial for the undergraduates to acquire as much knowledge as possible, which would serve as their guide and belief  in facing the harsh realities and uncertainties of the world today.

What was certain, he told the audience at the newly-revived speaker’s corner, Sudut Pidato Teres Eko Niaga UKM, was that apart from upholding the law, the undergraduates should also assist in combating crime, especially those involving their peers.

Even in their daily lives, the undergraduates could not run away from the realities that challenged their standing, and it was not proper for them to just fold their arms and do nothing in view of the situation that was becoming more and more worrisome.

With a peaceful and pleasant environment, not only could society live in peace and safety, the students themselves could study with calm and dedication.

In this situation they could, without doubt, obtain good grades each time they sat for an exam, and this, he said, must surely be their objective.

Incidentally, this is the the first time that the speaker’s corner was used by the debaters, who voiced out their feelings about the crime rate, fearing that it was reeling out of control.

The debate was attended by their respective supporters and the guest of honour, Prof. Dato’ Dr. Mohamad Abdul Razak.

Secretary of the Debating Council of Malaysian universities (MADUM) Encik Zameri Ramli felt that the return of the IPTA speaker’s corner was an appropriate platform for the students to air their views and ideas on any issue, and indirectly contribute to healthy activities.

The students and other members of the audience at the debate congratulated UKM for bringing back the speaker’s corner, where the students could, like those in the 1970s era, speak on any issues freely and not only at certain fixed time.