Cam legacy of the oldest Malay kingdom in Cambodia 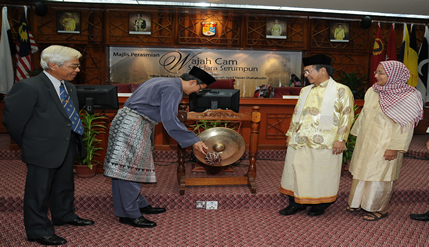 Bangi. 4 June, 2010.  –WHO does not know the Cams or the Cambodian Muslim community here? They have been living in our midst for the past 40 years.

Their presence here was a result of the genocide carried out by the Khmer Rouge regime in Cambodia leading to hundreds of thousands of the Campucheans seeking refuge in the neighbouring countries with most of the Cam Muslims settling here.

Some of them can now be seen in some villages with big houses doing business. Some of them have become successful gold traders.

But what about the life of the Cams who had remained in Cambodia especially those still living around Lake Tonle Sap and Kompong Thom?

Their lives are quite bad, living in squalid conditions and in poverty. This can be viewed at an Exhibition on the Cams at the Chancellory Building, UKM.

UKM Vice Chancellor Professor Tan Sri Dato’ Dr. Sharifah Hapsah Syed Hasan Shahabudin said in her speech at the opening of the exhibition today that buildings of the late Champa rulers can still be seen in forested areas of middle Vietnam. Her speech was read by The Director of ATMA, Prof Dr Abdul Latif Haji Samian.

Wall carvings and beautiful monuments which reflect the various cultural period as well as the physical environment and socio-culture of the old regime can still be seen in today’s Cambodia, on hills, the rice fields and riverbanks.

She pointed out that the remains are a reflection of the rich spiritual upbringing and material wealth of an ancient Malay kingdom.

“All this is a clear evident of an advanced civilization, a kingdom that has become part of history and is one of the most important elements in the cultural heritage of Vietnam today.     “When Vijaya, the capital of ancient Khmer was torn down in 1471, Islam has played an important role in opening the way for greater linkages between them and the inhabitants of the Malay archipelago. Relationships became much closer in the subsequent centuries,” she said.

The Cams who have been in Malaysia since 1975 still holds on to their culture and maintain their way of life as practiced in their home land.

Prof Tan Sri Dr Sharifah said after almost 40 years living in Malaysia, the ethnic Muslim Cams have fully assimilated with the local community with their children growing up in the Malaysian environment no longer recognising their traditions.

The exhibition showcases Cam culture and how they maintained their cultural identity in the face of a changing society. The photographs displayed at the exhibition show the everyday life of the Cams including education, economy and family life. All were taken by UKM researchers headed by ATMA’s Senior Research Fellow, Associate Professor Dr Mohamad Zain Musa when doing field work on the displacement of the Cams including in Cambodia.

Two seminars were held, on June 16, 2004 followed by a second seminar in November 2005 on the Muslim community in Indochina. Both seminars were attended by scholars from France, Cambodia, Vietnam and the United States.

Dr Mohamad Zain said it is sad that the rich heritage of the oldest Malay Cam kingdom has not been preserved and are now lost forever.

The exhibition at UKM show certain aspects of the 2,000 year old Cam history. The researchers also found that there are currently about 10,000 Cams living in Hainan Island, China. They migrated there in the 15th century.