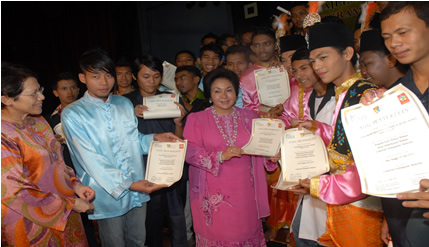 BANGI, 28  June, 2010  – Universiti Kebangsasn Malaysia (UKM)  has been successful in rehabilitating youths with negative attitudes and behaviours through a programme of transformation in line with the government’s move to overcome social problems among them.

Speaking at the closing of the Kem Perkasa Remaja 1/2010  (Youth Empowerment Camp 1/2010) in UKM here today, the wife of the Prime Minister, Datin Seri Rosmah Mansor congratulated UKM for initiating the project which had helped to rehabilitate the first batch of 33 youths from Shah Alam and Rawang.

The youths who were formerly ‘Mat Rempits’ went through the four  month programme undertaken by a group of psychologists of the university using a holistic module to engage them in overcoming their anti social behaviours by providing emotional and spiritual support as well as helping to develop their positive traits and intellect.

As patron of the Permata Negara programme, Datin  Seri Rosmah said society should not only care for the high achievers and smart youths but should also be concerned of those beset with problems so that they will not become social miscreants and be a problem to society.

If left on their own and without proper guidance they will easily fall prey to various negative influences and activities only to become a problem to society, she said.

Included in the programme were attachment stints at the Outward Bound School (OBS) and Malaysian Building Academy. One of the trainees has been accepted to be an assistant instructor at the OBS while another was offered work as an instructor with the Motorcycle Riding company. The others will undergo trainings at the National Youth Training Institute and Giat Mara.

She hoped that the trainees will be successful in life to be the pride of their families.

Datin Seri Rosmah said that whatever initiatives carried out for the problematic youths should provide them with facilities to enable them to give up their former negative activities and be able to stand on their own.

This could bring about  a paradigm shift in how society looks upon them from being a problem to becoming useful members of society with potential, she said.

She congratulated the UKM experts for taking urine and saliva samples of the trainees to know their hormon levels and to study their psychological changes in various aspects of self asteem, management of their behaviour including anger and being assertive, leadership quality and communications skills.

The trainees were also found to like outdoor and group activities showing high level of commitments and cooperation among themselves in such activities.

UKM’s vice Chancellor, Prof. Tan Sri Dato’ Dr Sharifah Hapsah Syed Hasan Shahabuddin in her speech announced that the university was consolidating the programme by setting up a Youth Empowerment Centre. The centre will analyse the programme and its aftermath for followup actions and recommendations. “We will thus cooperate to address problems of unruly behaviour by youths scientifically.”

She said that the camp is a commitment by the university to be actively involved in strengthening the ability of youth for social interactions as well as helping them realise their full potential.

The programme is an intervention thorough a camp to rehabilitate youth involved in illegal motorcycle racing, snatch thefts, gangsterism, drugs, free sex and other criminal activities.

She said that not all youths riding motorcyucles are invlolved in illegal racing but only a minority who want enjoyment. “We want to oversome the stigma of the ‘mat rempit’ labelling. The problem is not endemic,’ she said.

Prof Sharifah Hapsah said that the youths could just be victims of circumstances and something needed to be done to address and overcome the problem. She also congratulated UKM’s researchers for coming up with the programme.