UKM as a catalyst for interactions of various civilisations 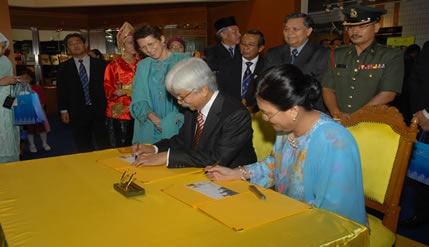 Bangi, May 18, 2010 – Universiti Kebangsaan Malaysia which celebrated its 40th anniversary today will need to continue to  cultivate excellence in the national language apart from challenges towards its internationalisation through the enrichment of knowledge, innovation and creativity.

In addition UKM has to continue playing its role as a University in a country which has Islam as its official religion apart from creating knowledge in its own mould, nurturing a conducive environment for artistic expressions, said the University’s Chancellor, Tuanku Muhriz ibni Almahrum Tuanku Munawir.

He said this in his Royal Lecture in conjuction with UKM 40th annivesary at the senate room of the university here today.

In his Lecture entitled “University for the Nation”  Tuanku Muhriz said UKM has to be prepared to meet all challenges in store in the 21th century especially when approching 2018 its target of becoming a leading university of the world.

UKM should continue with its mission of elevating Bahasa Melayu as a language of knowledge. “We know that the mission of UKM is guided by values like academic freedom, ethic, comradeship, justice, courage and voluntarism, he said.

The challanges that UKM has to meet has been identified as nation building, sustainable development, renewal energy, Islamic informatics,nano technology, advance and biological diversity in the development of bio-technology,” said Tuanku Muhriz.

Tunku Muhriz is confident that UKM will continue to generate and enrich knowledge that will be for global reference. By doing this UKM will attract the world intellects to join hands in research and to desiminate knowledge developed in the region.

“Scholars in UKM should learn from history that the development of a nation to become an industirialised country rests on the strength of knowledge.”

The Chancellor also touched on the role of UKM in changing the perception of Islam and wants UKM to find solutions through Islam to the various problems faced by the country like halal food, drug abuse, moral crisis, ethics in medicine and ethics in war among others.

All that has to be thought through to give an Islamic perspective to the world. “History of the Malays showed how Islam hasnot on ly moulded the culture, values and character of the Malays but also the non Malays Muslim community.

Touching on internationalisation, Tuanku Muhriz said UKM as an entity of the Malay World can play a role to bring back the interactions of various civilisations of the world to the region.