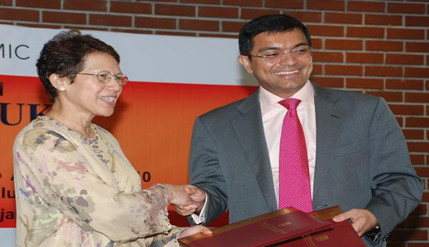 BANGI, 21 Mei, 2010 –  A UKM Waqaf (Endowment) Fund was launched today to help finance its research and academic activities as well as its various students welfare programmes which among others would help some of its needy students meet their expenses.

A Memorandum of Understanding to make this possible was signed by UKM and the Selangor Islamic Religious Council (MAIS) followed by the signing of  a Letter of Intent between UKM and CIMB that allows for its set up and how the public can contribute to it.

MAIS as the trustee of Waqaf property and funds in Selangor has set up a UKM Waqaf fund enabling any member of the public to directly contribute to it. The agreement with CIMB is to appoint it as the collection agent for the UKM Wakaf to facilitate contribution by internet banking with CIMB click. This enables anyone to contribute at any time, 24 hours a day, through CIMB click. CIMB will also sponsor and promote the UKM Waqaf fund in its Islamic Banks.

“The returns from the Wakaf Fund will be utilised for education, student welfare, the student development fund, research and academic development fund and UKM Industry and community network fund,” said Prof Sharifah Hapsah.

She hopes the UKM Waqaf Fund will develop UKM to be like the renowned Al Azhar University in Cairo which depended on its Waqaf fund for centuries. She also mentioned that Harvard University have  11000 endownment funds amounting to AS$16 Billion.

To kick off the campaign two websites had been set up: “Amal UKM 2010” and ‘Waqaf, Amalam Mulia, Budaya Kita’ andwww.endowmen.ukm.my.