Europe and Asia, do they have anything in common? 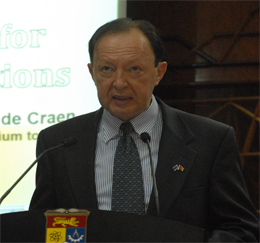 BANGI, 29 Oct 2010  –  The Europeon Union (EU)  does not discriminate entry of asylum seekers solely on the basis of their race or religions, the Belgian Ambassador to Malaysia, Dr Frank Van De Craen said.

In a talk on ‘The Belgian Presidency of the Europeon Union: Implications for EU –Asia Relations’ at UKM’s Institute of Occidental Studies’ third Round Table series here yesterday, Dr Van De Craen did, however, admit that things had indeed changed for security reasons after September 11, 2001.

“The EU is certainly more wary to accept immigrants from certain regions, and tighter screenings were done after Sept 11. But the EU does not deny the right to asylum and migration just because of a person’s race or religion,” he said.

Since then Europe had experienced a rise in Xenophobia, especially in France and Germany resulting in the French government’s proposal to ban the use of the hijab in schools initated in 2004.

There was also the campaign to ban minarets at mosques in Switzerland. Though Switzerland is not an EU member it is nonetheless part of the geographic region.

The ambassador claimed that these views were not mainstream but are extremist views which clearly infringe upon the freedom of choice and religion.

The immigrants are by and large different and they find it difficult to integrate into the EU societies. So populist politicians jump on the issue and try to present it as black and white issue but they are not the mainstream, he said.

Responding the questions on whether Europe has failed as a multicultural society he said: “I am afraid the answer is yes. Twenty years ago we never anticipate that we would have a large influx of the unskilled immigrant labours. ”

So the EU sees the only way to tackle the problem of such large influx is by tightening its labour laws.

He also said that Asia and Europe share some common grounds for example in economic and financial relations by rejecting trade or currency wars while upholding socially responsible markets.

Both regions also advocate for improvements in the quality of life of their peoples.

“Without imposing our views on social security policy, democracy or justice in Asia, we want to share with our Asian neighbours the experiences we went through since the 18th century from the very positive to the very negative,” said Mr. Van De Craen.

They also have a common concern on the global warming phenomena. This, he said, was also a new challenge for Europe and “we have no lessons to advice you. But we are all in the same boat and we expect a strong and honest commitment from Asia (on the issue), he said.