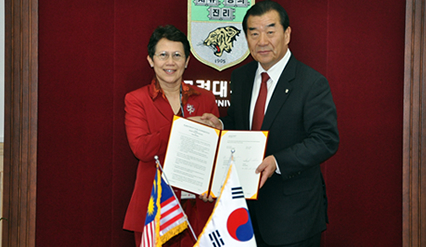 Seoul,  27 Oct. 2010 — Universiti Kebangsaan Malaysia (UKM) never use ranking as an absolute measure of quality as the indicators used capture a narrow range of what the university as a complex organization does, its Vice Chancellor, Prof Tan Sri Sharifah Hapsah Sahabudin said here today.

Instead, UKM uses a wide range of key performance indicators (KPI), covered under five pillars of excellence, namely governance, leadership, academia, teaching and learning and research and innovation. These KPIs are benchmarked with international good practices.

The conference  is organised through the joint efforts of the ASEM Education Hub (AEH) under the auspices of the Asia-Europe Foundation (ASEF), Korea University (KU) and the ASEAN University Network (AUN) on 26-27 October, 2010 in Seoul, Korea.

Prof Tan Sri Sharifah said, traditional accountability as conducted annually by the auditor and reported to parliament focuses on compliance with international accounting and finance procedures, adherence to rules and regulations to avoid extravagance, wastage and abuse of taxpayers’ money.

She then highlighted quality assurance, research university audit and university good governance index as the newer accountability in higher education

In the mid 1990s, Malaysia embarked on liberalization, democratization and privatisation to increase access to higher education and to check the net outflow of revenue by also attracting international students to study in Malaysia. In making Malaysia an education hub, quality assurance was an essential feature of accountability to students, parents and other stakeholders.

It was initially applied to private higher education institutions (HEIs) through the National Accreditation Board Act and later expanded to cover all HEIs under the Malaysian Qualifications Agency (MQA) Act. The MQA Act makes it mandatory for HEIs, either through a self accrediting mechanism or an external evaluation by the MQA, to ensure that all programmes are delivered at standards where they can be entered into the Malaysian Qualifications Register.

By the mid 2000s when world university ranking became fashionable and naively associated with quality and excellence, there was great obsession to get at least 2 Malaysian universities into the top 100. It was only in 2009 that it was agreed that autonomy was necessary for making greater strides towards excellence. However autonomy has to be “earned” whereby the government is willing to grant greater autonomy provided higher education institutions demonstrate good governance (institutional, financial, human resource and academic governance). A code of good university governance is being developed, from which will be derived the university good governance index as a measure of the readiness of universities to be granted autonomy. 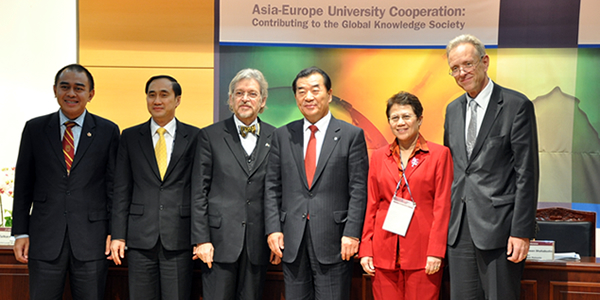 Tan Sri Sharifah Hapsah  highlighted the issues of overlapping criteria, insufficient clarity about the information that is required, inadequately trained auditors and the amount of time, energy and resources that have to be invested in complying to the requirements of the various auditing agencies and departments.

She emphasised the need for dialogue and cooperation of all stakeholders in developing the measures and for HEIs not to be distracted by performance indicators set by central agencies or ranking bodies. Instead she advised HEIs to develop their own strategic plans with performance indicators that are designed to achieve the university’s vision and mission. These KPIs should be benchmarked with international good practices. The KPIs demanded by external auditing bodies should be incorporated in the HEI’s plan. In this way HEIs will attain excellence in a systematic way rather than play to the ranking or accountability game.

The accountability culture should support the university’s overall strategic plan for service to humanity.

Prof Tan Sri Sharifah said the work is hard but the dividends derived are great. This include pride in achievement, international recognition, collaboration and increased research grant, accreditation, and student mobility.

Additionally, there will be stakeholder confidence through image and branding and elevation of reputation and most importantly, autonomy. 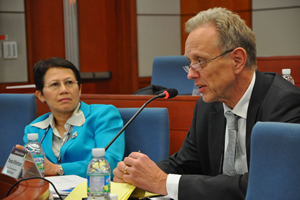 “ASEF considers education as central to the development of the individual,” said ASEF Executive Director, Amb Dominique Girard, “ASEF has initiated and has been supporting several programmes to strengthen collaboration between education networks and academic institutions in Asia and Europe.”  He added:  “The ASEM Rectors’ Conference is one of the centrepieces.”

Education was included as a priority agenda for leaders of the ASEM during the 6th ASEM Summit in Helsinki 2006.  The growing level of interdependence between regions in the areas of research and higher education has made interregional dialogue particularly relevant. Furthermore, fostering cooperation between universities in Asia and Europe can contribute to defining the role of higher education in a globalised society.

Said Korea University President Prof Ki-Su Lee: “In bringing together such a diverse selection of university leaders from Europe and Asia, I believe that the synergies created can greatly assist Korea University to achieve our dual goals of advancing the institution as a leading advocate for educational development in Asia, and in forming global leaders of the future.”

Further development of the ASEM education process and an exchange of ideas on relevant trends on higher education will be examined at the conference.

The AUN has undertaken a wide range of activities both within and beyond ASEAN.  It has substantially increased cooperation in higher education between Asia and Europe, including support for the 2nd ASEM Rectors’ Conference.

The ASEM Rectors’ Conference was first organised in 2008 by ASEF in response to the 1st Asia-Europe Meeting of Ministers for Education (Berlin 2008)’s call for structural education cooperation among ASEM partners.