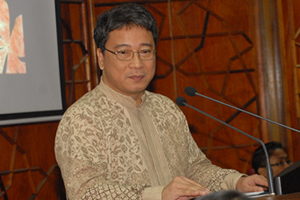 BANGI, 14 Oct.  2010 – Universiti Kebangsaan Malaysia (UKM) and Universitas Indonesia (UI) can dispel the very negative perception of Indonesians towards Malaysia by creating a data base of facts pertaining to various issues that could be easily accessed by the media.

The setting up of such a data base should be expediated to enable the Jakarta press to have access to facts and will thus not give any excuse to certain irresponsible media to distort any issue to the detriment of the good relationships between the two countries.

One of the first steps that should be taken is creating a data base of facts pertaining to issues which is easily accessible to the media.

The setting up of such data base should be given priority as the press and television stations in Jakarta are fond of publicising negative reports thereby creating a very bad perception of Malaysia among the Indonesia leading to unhealthy tensions.

The Malaysian Embassy officials also have a role by not distancing themselves from the people and especially the media merely because they only want to handle government to government relations. They should also build good rapport with media owners and influential newspapers editors in Jakarta.

These suggestions were made by panel members at a forum on Malaysia-Indonesia relations, organised by the Faculty of Social Science and Humanities, UKM as part of the UKM-UI seminar SEBUMI 3 here yesterday.

Dr Erman said UKM should take a proactive step by forming a Malaysia-Indonesia Research Centre that could provide facts on the various questions and issues that arise.

Zulkefli suggested perhaps it would be better for Indonesia to stop sending maids to work in Malaysia but instead send professors and engineers here.

He pointed out how housemaids usually have the negative connotations of being like ‘slaves’ and their presence had given a bad impression of Indonesia compared to late sixties when Indonesian films shown in Malaysia had resulted in Malaysians having high regards of the country.

Stopping maids from coming here may be a radical suggestion but this would help avoid cases of ill-treatment, however isolated, from being exploited by the Jakarta media to fan hatred towards Malaysia as had been the case recently.

The database created, he said, can help to present facts on certain issues and will not allow the media to manipulate reports.

Rejal said Malaysia do have problems with all its neighbours over their common borders but issues affecting Indonesia had been blown out of proportions by the media there creating a very bad perception of Malaysia among the Indonesians.

He gave examples of how Indonesian television stations keep on repeating clips of certain isolated incidents giving a very negative impression of Malaysia among the Indonesians thereby creating a lot animosity towards the country.

He lamented the role of embassy officials who seem to be more concerned over  government to government relationships which are already very good but had neglected its role of nurturing good people to people relations.

The embassy officials should be more proactive and not be aloof towards the people and should also cultivate the media and be more accessible to them, Rejal said.

However facts on important issues should be made available. There is need for academic research on the various issues that crop up.

“Unfortunately response from political leaders are not forthcoming whenever an issue arise and are usually late to respond. Whereas the leaders are just a phone call away.

“Without statements from leaders certain issues which could have been easily tackled fast were allowed to prolong and then blown out of proportions by the media resulting in the people not getting the real facts but influenced by negative coverage thereby creating a very skewered and bad perception of Malaysia,” he said.

He suggested UKM and UI together help to overcome problems of wrong interpretation and misrepresentation by publishing a standard information pack or academic papers for distribution.

“UKM and UI should also appoint officers responsible to give facts or become resource persons that is credible in order to correct the wrong perception created.

“Our universities have a social responsibility to help ease tension,” he said.

Dr Agus told of how negative reports in the Jakarta media make his students worry every time he wanted to move around in Jakarta especially when hot issues were fanned by the press.