Negative western influences a cause for worry, UKM VC 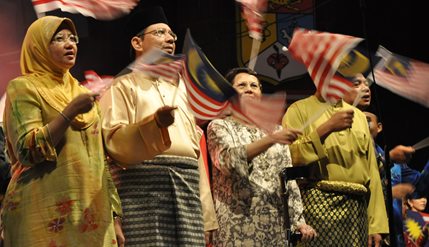 Speaking at a ceremony to launch the Commemoration of the 53rd Merdeka Celebrations at Dectar UKM, here at midnight yesterday, she urged Malaysians especially the students to make full use of their acquired knowledge to be innovative for the benefit the nation.

“Love of the nation will enable us to continue our spirit of co-operation and unity to preserve the peace and freedom in order to develop and uphold our sovereignity.”

Prof. Tan Sri Dr Hapsah reminded that after 53 years of independence  the people have to be vigilant  because dominance now come in many new forms.

Advancement in information technology and communications had exposed the people to diverse thoughts, opinions, ideologies, beliefs, values and the different ways of life of diverse groups.

She lamented that TV programmes had excessively propagated western lifestyles which are anathema to Malaysians. But children and the youths are easily swayed to such unhealthy lifestyles and relationships likening it to becoming a form of cultural domination.

Prof  Tan Sri Sharifah Hapsah said love and loyalty to the nation must continuously be nurtured in the ever changing world scenario. Such feelings would be a catalyst in the quest for knowledge to enable them to be on par with academicians and scholars the world over.

She mentioned UKM’s formation that have much in common with  the struggle for independence especially in upholding the Malay language. 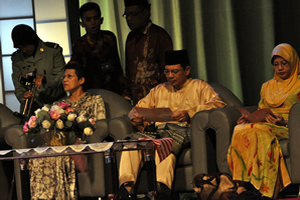 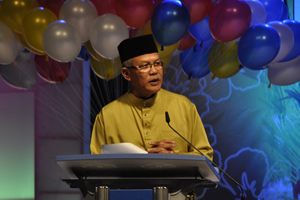 Bahasa Melayu (Malay language) is a symbol of the nation’s identity and a society that is independent. UKM has been the hallmark of the struggle for knowledge and academic achievements especially in Bahasa thereby continuing the struggle of the Malay Rulers, teachers, journalists, nationalists, school children and public.

UKM, she said, had been in the forefront in enriching Bahasa terminology and the publication of academic books as well as uploading Malay texts on to the internet.

The advent of globalisation has given UKM the understanding to bring Bahasa onto the international field while exhorting the need to master at least one other language.

Prof Tan Sri Syarifah Hapsah said, no one now need to go to China to seek knowledge since by just mastering Chinese many things can be accessed from the internet.

The ceremony was attended by students from public and private universities who are members of the Kelab Rakan Siswa Jasa Malaysia (KARISMA).

At the ceremony Kolej Aminuddin Baki was announced as the winner in the UKM premises decorations competition followed by Kolej Dato Onn and Kolej Ibrahim Yaakub. 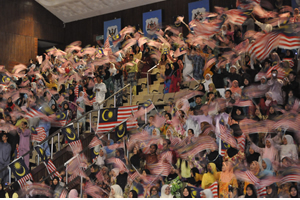 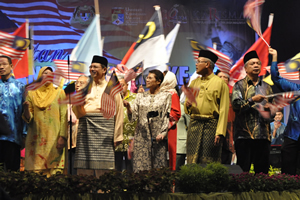