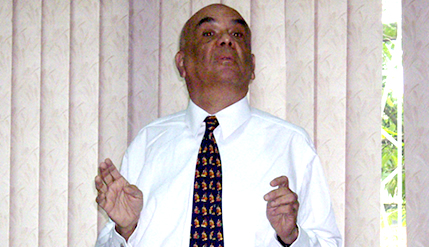 BANGI, 17 April 2012 – Mexico does not preclude the possibility of sending it’s tertiary students to The National University of Malaysia (UKM) at some point.

Mexico’s ambassador to Malaysia, Jorge Alberto Lozoya said that it would be up to the universities of both countries to pursue, perhaps starting with an exchange of students.

Such cooperation could be up for discussions at the government-to-government level but he declined to elaborate.

He was replying to a query after delivering a lecture as part of a series in Current Developments in Latin America at the Institute of Occidental Studies (IKON) here today.

Lozoya is a guest lecturer at IKON since last year. He said that Mexico is part of North America but is considered Latin to the wider world because of it’s Spanish heritage.

He is noted for his flamboyant style in delivery and expressed satisfation at the level of cooperation at the government level between the two nations but admitted that much could be done to dispell inaccuracies about Mexico among ordinary Malaysians.

He blamed the prevalent misconceptions about Mexico on sensationalism shown in some international satellite news channels and Hollywood.

He lamented that the news networks exaggerated the level of drug violence in northern Mexico even though it does exist.

He, however, said the negative publicity had not affected its trade ties with the United States and Canada where investments from America is rising.
The ambassador later gave a closed-door lecture to undergraduates.