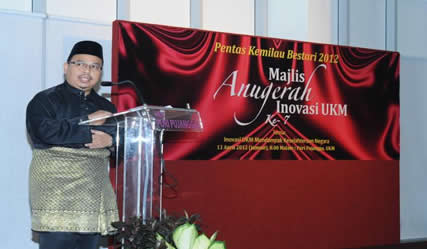 BANGI, 16 April 2012- The Radiology Department of UKM Medical Centre which provides cutting-edge radiology services to patients has won the Vice Chancellor’s Quality Award for the year.

The department which is equipped with state-of-the art equipment is recognised for its excellence in operation, performance and leadership. It has assisted specialists and experts in delivering the best treatment to patients.

It also serves as a destination site for medical imaging research while educating the next generation of leaders in imaging science and its technology.

The technology in the department have facilitated early detection of stroke so that treatment can be better administered and in many cases have helped stroke patients regain their normal life instead of having to live with permanent disability because of the attack.

The radiologists in the department are trained to rescue patients attacked by stroke due to blood clot by pulling the clot out from a blood vessel in the brain using a sophisticated device called MERCI.

Prof Sharifah Hapsah said an innovation only counts as innovation when it creates positive impact and the university is giving recognition as innovations create new values to UKM and the nation while helping to ensure efficiency.

She said innovation is the responsibility of all in UKM and not just from among a select privileged few like scientists. They include staff and students who would have also contributed if they have done something to make their work simpler or faster.

She likened the impact of innovation to a small pebble thrown into a pond which causes ripples that impacted the entire pond.

The UKM Innovation award is a yearly event to extend the university’s appreciation its staff and researchers for their innovative thinking and to cultivate a culture of innovation in the university.

It is not limited to researchers only but is open to all UKM staff and students.

More than 70 awards were given out for various categories to academic and administration staff as well as students.