Children Should Undergo Yearly Eye Test From As Young As Four 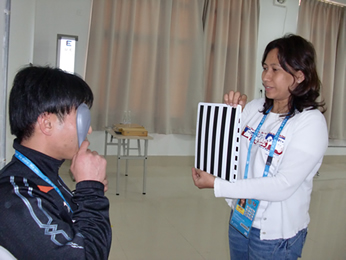 KUALA LUMPUR 15 August 2012 –  Children should undergo eye examination every year from the age of four as vision problems among youngsters are on the rise in the country.

An internationally recognised optomerist from The National University of Malaysia (UKM), Dr Rokiah Omar from the Faculty of Health Sciences (FSK) found the worrying trend from her studies on randomly selected kindergarten children in Sitiawan, Perak over a number of years.

Her studies was to identify the causes of vision problems among preschool children.

She said lack of health care, poor reading habits and watching at very close range for too long can damage eyesight in pre-school children.

Dr Rokiah, who is also an international optometry consultant said parents and guardians must bring their children to a specialist eye clinic for vision or eye examination before problems occur. They should not wait until the child complained of blurred vision before taking corrective measures

She said visual impairment can seriouly impact on a child’s social and mental development and an early detection is important to ensure a better prognosis for them.

Of those tested 43 children failed the vision screening and another 32 (6.7%) were confirmed having visual problems. The main causes identified from the study was refractive error (4.8%) followed by amblyopia (1.0%), strabismus (1.0%) and ocular abnormalities (0.8%).

In most cases, refractive errors represent a natural variation from normal vision and is not considered a disease. Refractive errors occur when there is a mismatch between the length of the eye, and its optical power. These mismatches usually originate during childhood, when the eyes are growing.

The exact causes of refractive errors are still being studied but it is known that both hereditary and environmental influences can affect their development, Dr Rokiah said. 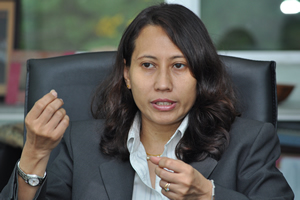 Myopia is also known as short sightedness and is a very common condition.  Usually myopia begins to develop in the teenage years and may get worse over the following years.

Myopic persons do not see distant objects clearly.  In a myopic eye, the light is focussed in front of the retina and so the image is blurred.  Myopic persons see close objects equally as well or at the most slightly worse than a person with normal vision.

Dr Rokiah Omar received her Bachelor of Optometry degree from UKM. After completing her BOptom in 1990 she was employed as an Optometrist with a private practice in Kuala Lumpur before joining UKM as tutor in 1994.

Dr Rokiah was the first Optometrist in the Asia region to be inducted as an International Blind Sports Federation International (IBSA) and International Paralympic Committee (IPC) Visually Impaired Classifier.