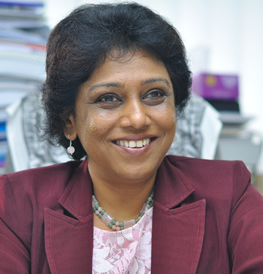 BANGI, 30 Aug 2012 – Malaysia’s reputation in sustainable forest development can put the country in a strong position as an exemplary player to many other nations, especially those in the West who have lost their own natural heritage.

The country should then take advantage of its strong bargaining position as the guardian of valuable tropical rain forests which attracts world-wide attention, a Plant Genetics and Biotechnology researcher at The National Universiti of Malaysia (UKM) said.

Professor Dr Wickneswari Ratnam of the Faculty of Science and Technology said contrary to some insidious allegations, Malaysia’s forest management is generally up to international standards despite some isolated incidents of illegal logging.

Though there is still room for improvement, she said Malaysia has exceeded the minimum 50 percent requirement for forest cover in tropical countries as agreed in various international conferences.

Prof Wickneswari and other scientists have been carrying out research for the past 15 years finding that local forests have the capacity to regenerate as long as the federal and state authorities comply with an agreement reached at the Earth Summits of 1992 and 2012.

Contrary to popular belief, conservation of forests means that intervention such as sustainable logging must be carried out. She explained that for a forest be productive, it has to have the older trees removed so that there is space for the younger trees to emerge properly.

She said the practice in Malaysia is that for every hectare of land, 4 to 5 big trees must be left behind after the rest are felled for lumber. This practice is being monitored by various agencies including the Forestry Research Institute of Malaysia (FRIM) and scientists.The regeneration cannot be expected to reach the original state, but Malaysia is doing better than previously thought.

There is a minimum of 30 years rotation cycle for harvesting of mature trees. After harvesting, regulations on replanting and the use of land surrounding must be adhered to by the timber concessionaire. The company must also submit a Post-Felling report to the authorities; failing which the concession would be revoked.

Prof Wickneswari made the case for Malaysia’s management of its ecological resources in a book she co-edited titled:Managing the Future of Southeast Asia’s Valuable Tropical Rainforests

She said wood-based industry in Malaysia and Southeast Asia is a major contributor to the regional economy but the connection between scientific research and the application and development of policy can be improved.

Malaysia has forest covers that are designated as National Parks, Permanent Forest Estates and Wildlife Sanctuaries. Although there has been sporadic illegal logging, those cases were isolated and do not reflect a general scenario.

She clarified that some non-governmental organisations (NGOs) don’t see the bigger picture when it comes to environmental issues, choosing instead to highlight discrepancies while ignoring the mainstream successes in the country.

Prof Wickneswari suggested that since many Western nations are very interested in the fortunes of tropical rain forests, Malaysia should use its strong bargaining position because of its stewardship of its own natural resources. The country is scientifically and economically managing the forests well enough, as the consumers follow the instructions laid down in the use of the resources.

According to some credible online resources, Malaysia’s primary forests are made up of dipterocarps trees. Dipterocarps are a family of tropical hardwood trees comprising about 500 species, with about 300 species located on the island of Borneo. Basically the evergreen tropical rainforests of the Sunda region is where they thrive. They have Malay names like Meranti, Balau, Kapur, Chengal and Keruing among others. Dipterocarps grow slowly and mature in over 20 years.

Dipterocarps can grow very tall and large and they form a very large proportion of the rainforest canopy in Peninsular Malaysia. An extensive study showed that up to 57% of the emergent layer of the lowland forest in Peninsular Malaysia is composed of diperocarps. In Sarawak, dipterocarps comprise even more of the emergent and canopy layer at 75%, while in Sabah, it can be as high as 90%.

Nevertheless no matter how well the forests can be managed, there is bound to be some issues that can be further researched.

One is the failure of seeds dispersal due to reduction of the number of animals that spread them. Forest recovery after logging can be enhanced by restoration of seeds dispersal services provided by animals. Thus the protection of animal habitats is important, she said.

The other issue is the threats to genetic viability of Southeast Asian forest species. An example is the harvesting of wood, such as commercial and illegal logging. Another is fragmentation due to the lack of proper planning in infrastructural development and agricultural activities.