UKM Gives Out Zakat Payments to Its Poor Students 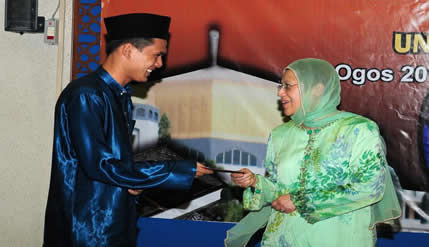 BANGI, 15 Aug 2012 – The National University of Malaysia (UKM) gave out RM16,200 from its Zakat Trust Fund to its needy and other poor students to help them celebrate Hari Raya which falls in a few days.

The money was given out by the Vice Chancellor, Prof Tan Sri Dato’ Wira Dr. Sharifah Hapsah Syed Hasan Shahabudin at a Breaking of Fast at the UKM Mosque here in conjunction with Nuzul Quran two days ago.

Those receiving the assistance were:

And another RM3,000 to poor and destitude students from the Sungai Merab Luar Religious Secondary School.

The presentation was followed by the Magrib and Isya’ as well as the Tarawih prayers, recitation from the Quran by Ahmad Sayafiq bin Mat Razali and a religious talk on the revelation of the Quran by Dusuki Abdul Rani.