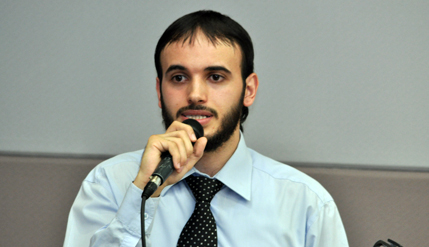 BANGI, 13 Dec 2012 – Palestinians in Gaza are likely to face even tougher times ahead because of the upcoming general elections in Israel on January 24.

PCOM representative Mohammad Al-Herbawi said whenever there are elections there, Israeli politicians will use the conflict in Gaza and confiscate Palestinian lands to give to Jewish settlers to gain mileage in the polls. Netanyahu will even use the Palestinians as a scapegoat for the Tel Aviv regime’s economic problems, he said.

Al-Herbawi was speaking at a forum on Palestinian suffering under Israeli occupation at The National University of Malaysia (UKM) campus here today. The forum was organised by students of the Law Faculty.

He said recent air attacks by the regime on densely populated areas showed that Netanyahu was becoming even more desperate to stay in power following the United Nations General Assembly overwhelmingly voting in a resolution to grant the Palestinians non-member observer state status.

The vote upgrades the Palestinian Authority’s status within the UN without creating a Palestinian state, but putting it on par with Taiwan and the Vatican.

He said Netanyahu and other hard-liners in Israel were so incensed of the Palestinians’ major victory in their quest for independent international recognition, that they stepped up drone attacks on Gaza – killing scores of innocent civilians.

With polls looming in Israel, the Palestinians who bravely stayed on their lands can expect even more assaults in addition to threats from Jewish settlers who coveted the Arab properties. 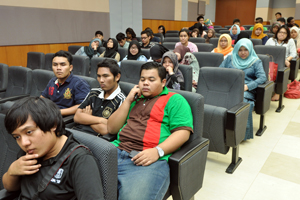 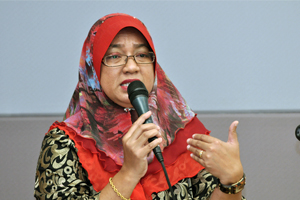 As for Tel Aviv’s accusations that rockets were fired deep into Israel from the Palestinian side of the border, Al-Herbawi explained that it was a reaction to the assassination of Hamas leader Ahmad Jabari in a drone missile attack on November 15. It was totally unprovoked, said Al-Herbawi, because just two days earlier, Egyptian President Mohammad Morsi had brokered a truce in Cairo which both sides pledged to honour.

Al-Herbawi thanked Malaysia for its unwavering support to the Palestinian cause, as witnessed by the convoys sent over land and sea. Al-Herbawi left Gaza for the first time in 2006 to study in Malaysia at The International Islamic University (IIU). After receiving his Bachelor of Science in Chemistry, he is now doing his Masters at the same University. He has yet to return home since coming to Malaysia in 2006.

At the forum, Law faculty lecturer Dr Salawati Mat Basir spoke about her recent visit to Gaza and the true intentions of the Tel Aviv regime.

Dr Salawati said what she saw in Gaza left no doubt in her mind of the Jewish regime’s strategy.

She explained that the Israeli attacks and violence would become so routine, that the international community would be desensitized to all such news. She said Israel’s violations of International Law would become so common that eventually the regime hopes most people in Europe and America would conveniently forget the plight of the Palestinians.