Malaysian Mainstream Media Gets More Freedom Than Those In Singapore 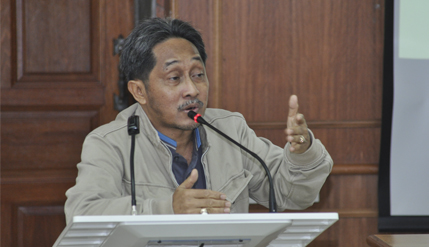 BANGI, 10 Dec 2012 – The mainstream media in Malaysia gets more freedom than offered to those in Singapore due to draconian regulations which keep news organisations there on a short leash.

A journalist and author who has had a long experience working in both countries, Dr Norman Suratman said he finds it is easier to work as a newsman in Malaysia than in the republic where all mainstream media units are owned and controlled by the ruling party, the People’s Action Party (PAP).

The Executive Director of the Asia Journalist Association – Singapore, who has worked for 23 years as a journalist in the region was speaking at a discourse on Islamic Journalism; Contemporary and Past organised by the School of Media and Communication Studies (PPMK), Faculty of Social Sciences and Humanities of The National University of Malaysia.

He said that he found it easier to work as a newsman in Malaysia than Singapore where all the mainstream media in the republic dare not report views and comments of dissident politicians because of draconian media laws there.

Prominent opposition politicians such as Joshua Benjamin Jeyaretnam and Chee Soon Juan, among many others, have been sued for defamation by government politicians under Singapore’s strict libel laws. They were both bankrupted and made to pay a few hundred thousand dollars in compensation.

Tang Liang Hong, another opposition politician and a former solicitor, was also sued for defamation by government politicians in 1997. He was convicted of defamation and ended up bankrupt. He subsequently left Singapore for Australia. In the 1990s, another Worker Party member Gopalan Nair left Singapore and obtained asylum successfully in the USA.

Dr Norman is of the opinion that prosecuting or suing critics based on libel or slander laws is counter-productive to the healthy growth of the media.

As to whether the media has become the tool of its owners, he said Malaysia, Singapore and many developed countries have similar practices. He gave examples of the United States, Britain, Australia and Italy, where the Press and televisions are controlled by tycoons such as Rupert Murdoch, Lord Maxwell, Silvio Berlusconi and others.

Apart from that, Dr Norman expressed hope that Muslim journalists and media owned by Muslims would use information that had been obtained through Islamic principles, ie honestly and not through falsehood or trickery. He said reporters in the West would use trickery like impersonations and pranks just to get their “scoops”.

He described the ideal Islamic journalist as a trust holder for the public.

Dr Norman was born in Singapore in 1964 and received his early education in the republic but attended secondary school in Malaysia to form six. He continued his studies at the Nanyang University in Singapore, now the Nanyang Technological University.

He has worked in various capacities in the media units of the Singapore Press Holdings (SPH) and did coverage in Malaysia and Singapore. He was also assigned to other ASEAN countries. Dr Norman later resumed his studies at UKM for a Masters Degree and a PhD in media studies.

He has authored books of autobiography and novels, and edited the work of other authors. He is now a free-lance journalist.