Paddy Farmers In Sabak Bernam Exposed To Effects Of Pesticides 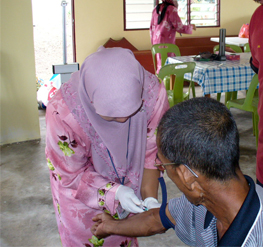 BANGI, 9 Dec 2012 – A team of UKM researchers suggested that specific trainings on safe use and handling of pesticides should be given on a regular basis to paddy farmers to ensure they are protected from the hazardous effects of pesticides exposure.

The team found 75 per cent of the farmers checked in Sabak Bernam, Selangor experienced at least one pesticide exposure symptoms.

“The presence of pesticide exposure symptoms proved that most of the farmers were exposed to hazardous effects of pesticides.”

Suggestion for the safe use and handling of pesticides for paddy farmers was made in their report: “Chlorpyrifos Blood Level and Exposure Symptoms among Paddy Farmers in Sabak Bernam, Malaysia”.

Dr Rozita said various studies indicate that the unsafe use of pesticides is still a dominant issue especially in developing countries with a large number of the farmers exposed to their unsafe use. There are still high rates of acute poisoning due to chlorpyrifos exposure.

“Intervention studies are few but demonstrate the need for evaluation of current preventive measures as well as policies related to pesticide usage,” she said.

The objective of the cross-sectional study was to gather baseline information on chlorpyrifos blood level and its relationship with pesticides exposure symptoms.

Respondents were asked what symptoms they had experienced within 24 hours after a pesticide application session.

The most common was giddiness (41 percent), redness of eyes (40%) and headache (25%). Their findings on habits at pesticide application sites showed that 83% of the farmers admitted they mixed more than 2 pesticides, 99% said they used the empty containers for other purposes and 54% threw the empty containers in open dumping sites.

Blood samples were taken from the farmers and out of these, 7% were detected to have chlorpyrifos with mean chorpyrifos level of 7.29ng/ml and standard deviation of 5.84ng/ml. 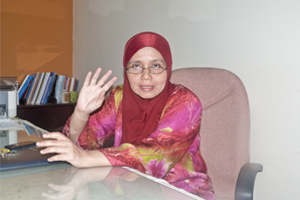 She said the farmers had low scores on safe practice of pesticide use even though they have high marks on knowledge and attitude.

It was also found that there is no significant association between the scores on knowledge, attitude and practice on pesticide use and the chlorpyrifos blood level.

Sabak Bernam district was chosen as it has 10,213 of the 19,665 paddy farmers registered in Selangor. Some 90% of the paddy farmers there used chlorpyrifos as insecticide on the paddy stalks. It is popular because of its availability and reasonable price.

Preventive treatment with insecticides such as chlorpyrifos at high dose before the planting season of a new crop (soil drenching) is a common practice in some tropical intensive cropping systems.

Some farmers use it as an insecticide on grain, fruit, nut and vegetable crops, cottonfield as well as on lawns and ornamental plants.

Others use it on sheep and turkeys, for horse site treatment, dog kennels, domestic homes, farm buildings, storage bins and commercial establishments.

Chlorpyrifos acts on pests mainly as a contact poison, with some action as a stomach poison. It is available as granules, wettable powder, dustable powder and emulsifiable concentrate.

In Sabak Bernam, farmers plant the paddy every 8 to 10 months because of the availability of modern farming methods. For example, they use tractors to plant the paddy plant, unlike the traditional manual method that use a special handheld tool, the kuku kambing. Modern techniques were used to increase their rice production.

She said as this was a cross sectional study, they used multistage random sampling on six sub-districts selected from a list of all the subdistricts there.

A total of 100 respondents made up of farmers from various villages in Sabak Bernam especially residents of Kg Tebuk Pulai, Kg Parit 1, Kg Parit 2 (Timur) and Kg Parit 2 (Barat) were recruited for the study. The inclusion criteria were farmers using chlorpyrifos for the past six months, did not have any medical problem and agreed to give blood samples.

The study tool consisted of questionnaires which the respondents filled up. The questionnaires contains information on sociodemography, use of pesticides as well as symptoms of exposure to pesticides.

Chlorpyrifos is moderately toxic to human beings. Various studies have reported adverse effects of chlorpyrifos on human body such as the central nervous system, the cardiovascular system, the respiratory system as well as skin and eye irritant.

Vulnerable groups would include people with respiratory problem, recent exposure to cholinesterase inhibitors, having cholinesterase impairment, or liver function disruption.

They can also experience influenza-like condition with headache, nausea, weakness, loss of appetite and malaise. There are many overseas studies that estimate and measure the exposure routes and biological monitoring of chlorpyrifos.

Exposure symptoms varied depending on properties of the chemical compound. A study found that 95 percent of the farmers experienced body pain while 82 percent had eye redness after pesticide application activities.

Our study found that the percentage of farmers experiencing giddiness and redness of eyes were 41 percent and 40 percent respectively.

Organophosphorus compounds have been widely established as chemicals which have potent neurotoxic effects. They are widely used in both the industrial as well as the agricultural sectors.

The neurotoxic effects can be divided into few actions. 1 Primary action is the irreversible inhibition of acetylcholinesterase, resulting in acetylcholine accumulation and overstimulation of nicotinic and muscarinic receptors. This results in cholinergic effects.

A delayed onset of ataxia, with axon and myelin degeneration is another form of organophosphorus (OP) neurotoxic action. It is known as OP ester-induced delayed neurotoxicity (OPIDN). Large toxic doses of OP cause acute neuronal cell death in the brain, but sublethal dose produces neuronal cell death and involve oxidative stress. The exact mechanism has yet to be explored.

In this study, the exposure opportunity of farmers and their family members to the hazards of pesticides are high, as most of the farmers store the pesticides either in their houses or in sheds behind their houses.

Since their houses are located adjacent to the paddy fields some less than 50 metres from the pesticide mixing areas the potential of the houses getting pesticide mists are high especially when the wind blows across the area.

Another study carried out in 2000 among Malaysians living adjacent to agricultural areas found 7.3% of the respondents had chlorpyrifos in their blood.