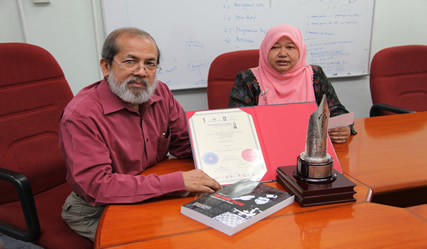 BANGI, 16 Feb. 2012 – The high level of professionalism in publishing besides close attention to details won Penerbit UKM, the National University of Malaysia’s publishing arm, the National Book Award for the Best Biography category earlier this month.

The award for the biography of ‘Tun Abdul Razak: Statesman and Patriot’ is an appreciation from the National Book Development Foundation and The Oxford Centre for Excellence, UK for 2012. The award was presented by the Minister for Higher Education Datuk Seri Khaled Nordin at a function at the Putra World Trade Centre, Kuala Lumpur.

The first print of 2,000 copies of the book was a sellout while the second edition of 1,000 copies were now in the market.

The late Nik Anuar was a the Professor of History and Senior Research Fellow at the Institute of Malay World and Civilisation (ATMA) UKM. National Laurette Emeritius Professor Dr. Muhammad is attached to the Centre for Humanities Studies, Science University of Malaysia (USM), Penang while Ghapa is a lecturer with the Department of History, Political and Strategic Studies, Faculty of Social Science and Humanities, UKM.

The Head of Penerbit UKM, Prof Dr Kamaruddin M Said said research and writing of the book began in 1992 with a grant of RM400,000 from the Tun Abdul Razak Foundation.

At the moment only the Malay edition of the book is on sale while the English edition would be in the market soon.

“A lot of time was needed to write the book as most of the earlier research was done in United Kingdom where Tun Razak studied and started to be interested in politics.

“All facts collected was written by the writers and sent for checking and assessed by the chairman and committee members of the Tun Razak Foundation.

“For the younger generation facts in the book is very important as reading it would make them understand the rational behind the policies initiated during Tun Razak’s era and later implemented by Tun Dr Mahathir Mohamad.

“Tun Razak was a brilliant thinker who brought forward original ideas to help the people and looking back it was he who mooted the idea of 1Malaysia when he introduced the concept of power sharing among the races in this country,” said Prof Kamaruddin.

In his blurb for the book, Prof Kamaruddin said Tun Razak, the second Malaysian Prime Minister was the architect in nation building.

When he led the country after the tragic May 13 riot in 1969, the Tun implemented the two pronged strategy new economic policy to enable the country to achieve economic development while taking steps to restructure the economic and social framework of multi-racial Malaysia.

Tun Razak introduced Rukun Negara and The New Economic Policy which helped to spur developement of the nation in the long term.

The book potrays Tun Razak’s early days, his struggles, vision, mission and sacrifices as a stateman and Malaysian patriot.

Among the important topics in the book is ”the birth of a patriot, experiences during the Japanese Occupation, studying in England, the struggles in UMNO, the formation of Malaysia, facing the Indonesian confrontation, the New Education Policy, the New Economic Policy and spirit of conciliation in Barisan Nasional.

“Most of the quotes in the book is the result of comprehensive reseach and authoritativeness of the three writers who have extensive experience,” said Prof Kamaruddin.

Its second edition was published in 2009.