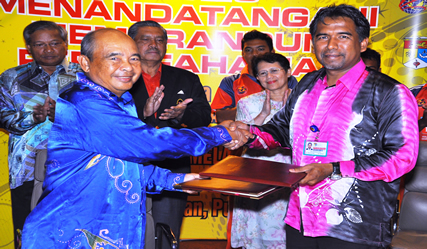 PUTRAJAYA, 28 Feb. 2012 – The national University of Malaysia (UKM) has renewed its collaboration with the Malaysian Malay Cricket Association (PKMM) to open its doors to national athletes to further their education.

The collaboration began in 2007 through a Memorandum of Understanding between UKM and PKMM to produce national athletes who excel in both sports and academic studies.

Each of the best athlete received a certificate, a challenge trophy and RM1000 cash.

Another 25 students and one staff member who had represented the country in various sports were given a RM300 cash incentive each.