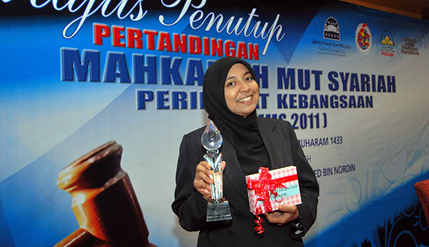 Her victory was a boost to the UKM team which faced students from Universiti Sains Islam Malaysia (USIM) in the final.

However, the UKM team – represented by Nor Salwa Abdullah Thani, Nur Sabrina Abdul Hamid, Nor Hafizah Haron, Madihah Ismail and Syamimi – lost to the team from USIM, which is also the defending champion. The UKM team was under the guidance of Associate Prof. Dr Zaini Nasohah.

As the best advocate Syamimi received a cash prize of RM1,500 and a trophy.

In the final, the UKM team was the proposer in the debate on Child Care Rights and brought along reference books, laptops and printers to back up its argument.

It was organised by USIM together with the Higher Education Ministry, the Disciplinary Council of Malaysian Universities and the Malaysian Association of Syariah Lawyers.