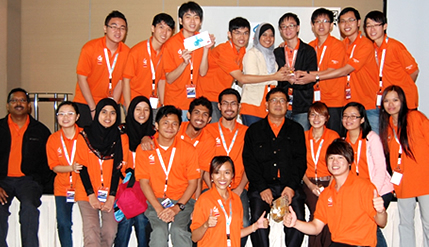 The competition held on Dec. 17 and 18,2011 at Prince Hotel, Kuala Lumpur was organised by the Environment, Safety & Industrial Guidance for Student Engineers(Prestige) of the Malaysian Gas Association (MGA).

A lecturer of the department, Masli Irwan Rosli who acted as supervisor and advisor to the UKM teams said it was an important achievement since UKM students had proven themselves to be the best, able to win over the jury especially in preparing their report and assignments before presenting it convincingly.

UKM students also won second prize for the ‘ice-breaker’ session with an impressive performance after dinner on the first day.

The competition among the universities is one of the activities in the Prestige Programmes 2011 aimed at instilling awareness on the importance of ‘Health, Security and Environment’ in life.

The programme also gave students the opportunity to be exposed to careers in the oil and gas industry.

The participants were also given briefings by officers and representatives of Gas Malaysia, Shell, Exxon Mobil, Department of Safety and Health (DOSH) and NGOs.

The competition was divided into two parts. The first involved case studies in which participants needed to identify the dangers/risks within the hotel’s surrounding and write their reports.

In the second stage students were required to study the risks and dangers during the Shell Eco Marathon held in Sepang.

They needed to analyse the risks and dangers and suggest ways to overcome them. The two reports have to be presented at the end of the programme.