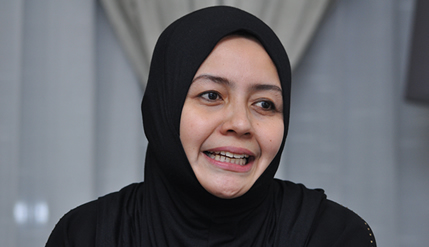 BANGI, 26 July 2012 – More than 40 disadvantaged children infected with HIV/AIDS or abandoned by their parents and being cared for by the Nurul Iman home were feted to a charity breaking of fast by UKM Holdings, a subsidiary company of The National University of Malaysia (UKM) at Puri Pujangga here this evening.

Nurul Iman Association, also known as Puan Norlina Alawi’s Mega Family, houses abandoned or abused children who are victims of incest, AIDS infected or converts cast out by their families in addition to seven of her own biological children.

Puan Norlina, 41, who owns several boutiques and business consulting services has been taking in such children since 2001 and now have a total of 37 foster children.

Six of the children are orphans, two Filipino converts, five Indonesians and 16 abandoned and eight children of single parents infected with HIV/AIDS. Some are abandoned or abused by their parents, victims of incest, HIV/AIDS infected or converts cast out by their families.

UKMHSB which plans and monitors the establishment of start-up companies, has been supporting Puan Norlina’s big family through financial assistance in recognition of her efforts in caring and protecting the children.

Puan Norlina attributed the rising number of HIV/AIDS cases to rampant drug abuse, promiscuity and having babies out of wedlock.

As a humanitarian, she said she was only following in the footsteps of her late mother who would not deny assistance to anyone regardless of faith, race or age.

She was dismayed that even in these enlightened times, few individuals or Non-Governmental Organisations are willing to help such unfortunate children. She said those who are able to help still have misconceptions and unfounded fears about AIDS. They often pass the buck to care for the children to families or relatives or the government.

She does not hire maids or nannies to look after the children. All work at home are done by the family with the younger children cared for and guided by their older brothers and sisters in a mentoring or “Buddy” system.

Her husband, Lieutenant-Colonel Roslan Zakaria, 43, serves in the Territorial Army regiment and helps out when not on duty. Their eldest biological child is a son aged 21 studying at the Mara Institute of Technology University (UiTM). Their eldest adopted son is now 30 years old and a student at a Polytechnic in Pasir Gudang.

Puan Norlina was born in Kluang, Johor in 1971. The second child of nine siblings of a Johor Forestry Officer, she was brought up to be pious and sympathetic to those less fortunate and to assist the disabled from an early age. She received her secondary education at the Kluang High School and married while still in her teens to a career army officer.