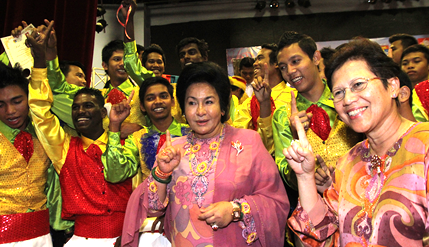 BANGI,  2 July 2012 – The Youth Empowerment Centre (PERKASA) set up by The National University of Malaysia (UKM) has succeeded in meeting its objective of reforming wayward youths like ‘Mat Rempits’ (illegal motorcycle racers) to becoming more responsible and able to lead normal and productive lives.

Its Patron, Datin Paduka Seri Rosmah Mansor said studies showed youths who took part in the PERKASA programmes had changed for the better in their personalities and self-esteem.

Closing the third and fourth series of the programme here today, the Prime Minister’s wife praised PERKASA for being able to reform the delinquent youths and getting sustainable jobs for them.

At the ceremony 32 of the participants from the third camp delighted the VIPs and the audience with a song and dance routine. All the successful participants received their certificates of completion.

The third session from October 16 until December 20 last year had the participation of 39 youths from the Tun Razak Housing Project while 34 youths detained under the Community Service Ordinance (CSO) took part in the fourth camp from May 16 to June 16. Most of them had been charged under section 42 of the Road Transport Act for riding motorcycles in a dangerous manner.

The camps were carried out with the cooperation of the Social Welfare Department, the Youth and Sports Ministry and Kuala Lumpur City Hall.

The Youth and Sports Ministry assisted in giving advice on skills development and provided them the opportunity to continue their training at the National Youth Skills Institute (IKBN).

The socio-economic profile of a typical participant showed him to be from either the middle or the lower income groups, usually a school drop-out and a juvenile delinquent sentenced by the court to carry out community service under the CSO.

Their ages range between 17 to 24, most of whom were Malays. Most had been working while the rest were unemployed. 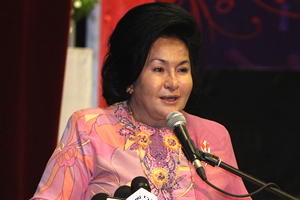 Interviews done indicated they had also been involved in free sex, rape, hanging out at nights, using foul language, theft, robbery, gambling and other anti-social habits.

During group therapy sessions, it was revealed that they came from families with domestic problems who ignored them. They also admitted to lack of direction in life and were in despair.

The information was made the basis for the training modules created to empower their self-confidence, integrity, self-restraint and resilience. The camp also emphasized on communication skills, team-work and self-esteem. A post-mortem done after the fourth session indicated an improvement in their overall attitudes.

Both the third and fourth series used the experience of the earlier sessions to upgrade and update the modules with more emphasis on development of their spiritual, emotional and intellectual capacities.

All the trainees had to pass through several phases. The first was that of self-discovery, emotional and spiritual development which was held at Gemencheh, Negeri Sembilan.

The second phase developed their awareness of the outdoors and expeditions, with a kayaking trip to Teluk Sekadeh, a sailing expedition to Pulau Syawal and camping out on their own. The second phase was carried out at the Outward Bound School at Lumut, Perak.

The final phase was an intensive technical course at IKBN where the youths were encouraged to learn more about life-long skills to prepare them for future careers. They were also encouraged to be more adaptable to education.

With such opportunities, the trainees saw the more positive outlook of life being more confident and ready to be productive members of society.

Statistics from the first, second and third sessions showed 70% of the participants were gainfully employed.

They went through a rebranding exercise that changed their lives. Some went on to become policemen, auxillary policemen, cooks and trainers at the Outward Bound School. Others opted to become self-employed while the rest went back to school.

So far, graduates of the third session showed the best turnaround. Those from the fourth session will be evaluated soon.

PERKASA UKM was formed in February 2010 with the primary mission to be a centre of excellence of international renown which examines in depth the problems of alienated youths through various strategies to reform them.