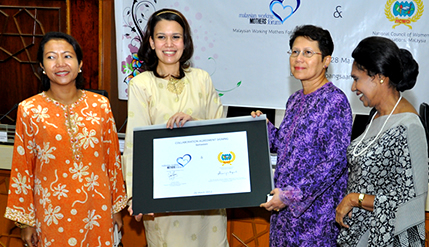 PETALING JAYA, 28 Mac. 2012 – The National Council of Women’s Organisation Malaysia (NCWO) has thrown in its support to the Malaysian Working Mothers Forum (MWMF) in its efforts to assist mothers who have to manage both family and work.

Prof Sharifah Hapsah who is also the Vice Chancellor of the National University of Malaysia (UKM) said NCWO was impressed with the MWMF initiatives to have a social networking platform, website, polls and surveys as well as guidebook to assist working mothers.

“As the advisory body and catalyst for the change in women’s status and their participation in national development, we see a major potential in MWMF’s ability to help working mothers achieve greater fulfillment in their career and home life,” she said.

Ms Parveen said MWMF was established early last year to raise awareness about working mothers’ needs. The female population forms more than half of Malaysia with more of them becoming a major workforce.

Unfortunately a lot of women have also been forced to leave work due to inadequate support provided by the workplace and the overwhelming struggle to balance work and the home.

MWMF was thus formed to raise awareness about working mothers’ needs and inspire them to achieve balance and fulfillment through a supportive online community where they can seek support, Ms Parveen said.