AsiaEngage To Promote Civic Role Of Universities Set Up In UKM 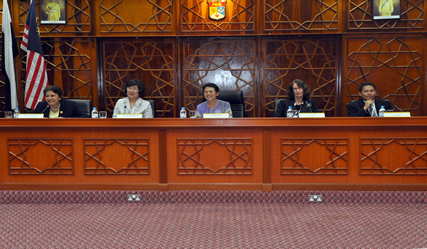 BANGI, 10 May 2012 – Partnerships by universities with the industry as has been implemented by The National University of Malaysia (UKM) can be scaled up across national boundaries to the wider region to benefit their communities.

This was the consensus of the 150 participants at the three day conference on university-community-industry engagement in the region which ended with a dialogue on “Forging Meaningful Partnerships” to look at ways to develop mutually beneficial links with communities and industry.

Academics and representatives of NGOs in ASEAN and the Asia-Pacific region expressed the need for the countries to do more to promote social and community engagement saying that in an interlinked world, it was important to create a ‘knowledge society’ where the benefits of knowledge were shared for the good of society as it was to create a knowledge economy.

They conceded that the jury is still out on how to create such a knowledge society.

Leading academics from the region say ‘AsiaEngage’ with a secretariat at UKM will support developments in the ASEAN region by strengthening the civic role of universities as well as work in collaboration with voluntary organisations and NGOs, philanthropic foundations and the industry.

UKM Vice-Chancellor, Prof Tan Sri Dato’ Wira Dr Sharifah Hapsah Syed Hasan Shahabudin said coming out of the ivory tower and being involved with communities was not something new for universities.

It was one of UKM’s universal missions in line with the social contract the university has with bodies that provide the funds. What was new is the efforts of like-minded institutions that want to work together for greater impact, she said.

She described AsiaEngage as an inclusive umbrella for engaging communities and mutually transferring knowledge and expertise for community development.

She said as much as knowledge will empower and develop communities to their optimal potential, universities will also be enriched by knowledge from the communities making it a two-way process.

Conference delegates were told by some academics and NGOs that many universities were not designed for the knowledge economy and not all could produce world-class knowledge and research.

However, the solutions may be nearer to them than they think – if only they would engage with their communities in an equal and respectful way.

AsiaEngage, which already has 68 members in 16 countries, bring together the rapidly growing Asia-Talloires Network of industry and Community Engaged Universities; the ASEAN University Network’s thematic university social responsibility and sustainability network set up in October 2010; and the ASEAN Youth Volunteer Programme.

UKM Deputy Vice-Chancellor (Industry and Community Partnerships), Prof Dato’ Dr Saran Kaur Gill said AsiaEngage is a platform not only for universities but also the NGOs, foundations and industries to collaborate with universities.

Such partnerships in the past had been ad hoc and the new network is to consolidate those partnerships.

The idea of the network is to identify social, environmental and economic challenges that universities can help tackle in alliance with organisations on the ground.

It will enable universities to be directly involved in improving the quality of life of people in the region, including helping to meet millennium development goals, disaster preparedness and response, and creating links between research, education and volunteerism.

She said that NGOs which have depth and can reach out to communities and were thus critical partners in such endeavours.

Universities with the intellectual capital and knowledge generation capacities are suitably positioned to take the lead and they are already becoming involved in such projects in the region but the AsiaEngage platform will help support a more sustained involvement and the development of a model for universities to engage in the community that can be replicated in other countries, Prof Saran said.

Nantana Gajaseni, excutive director of the ASEAN University Network said universities in the region do provide services to the community but not in a systematic way and AsiaEngage will provide a clear avenue to connect them and get together the results and assess the impact on the community.

Prof Reid said the Talloires network believes that higher education institutions exist to serve and strengthen the societies of which they are part.

AsiaEngage members automatically become members of the Talloires network, which has grown to 240 institutions in 65 countries.

The conference was organised by UKM in collaboration with the Higher Education Ministry, the Talloires Network and the ASEAN University Network.