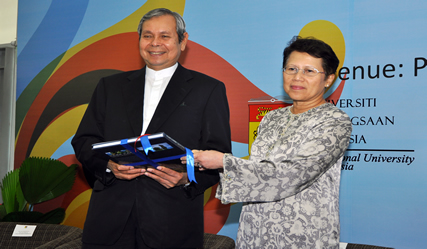 BANGI, 7 May 2012 – Universities given autonomy can under take commercial projects with the private sector without having to wait for endorsement by the Ministry of Higher Education.

Its Deputy Minister Datuk Saifuddin Abdullah said they are free to be enterprising to undertake projects that are sustainable and profitable.

He praised The National University of Malaysia (UKM) and one of the country’s corporate giants, Sime Darby Holdings for their joint projects in sustainable developments.

Both UKM and Sime Darby Holdings have been exemplary in their work on palm oil waste products which could assist preserving the environment, he said.

Other corporations, and not just government-linked companies, should do similar schemes based on their strengths and budgets. Datuk Saifuddin said it was quite acceptable to be profit-oriented so long as the community also benefits.

He was speaking at the opening of a regional Conference on Higher Education-Community-Industry Engagement here yesterday aimed at forging partnerships across ASEAN and Asia through sustainable development.

During the question and answer session, Sime Darby was asked whether the conglomerate would fund a bio-diesel from palm oil project.

Tan Sri Dr Wan Zahid Wan Nordin a council member of the Sime Darby Foundation did not rule out such a possibility but the company was taking one step at a time because the sustainability scheme of palm oil waste still needed a lot of attention.

He acknowledged that Sime Darby do not have enough researchers and needed expertise from local universities at reasonable costs even though there could at times be differences in opinion on the sustainability of projects between researchers and business people.

Nevertheless, he was confident that there could be cooperation between them.

The conference also discussed the role of Non-Governmental Organisations (NGOs).

Deputy Vice Chancellor (Industry and Community Partnerhip), Prof Dr Dato’ Saran Kaur Gill said NGOs should also be consulted in such partnerships as the feelings of the people who were directly affected by the projects needed to be considered.

Any partnership would face hurdles if the community opposes it, such as what had been seen in the wake of the Lynas project in Kuantan, Pahang.

More than 150 representatives of NGOs, academics, researchers and corporations from the region and including Latin America took part in the three-day conference.

It was organised by UKM in collaboration with the Higher Education Ministry, the Talloires Network of Australia and the ASEAN University Network.