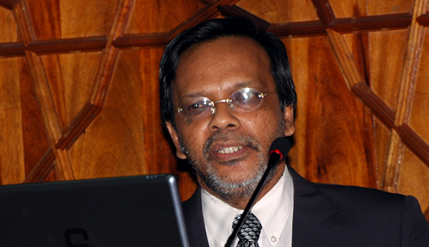 BANGI, 18 May 2012 – A UKM Professor has suggested the university internationalised the study of the Malay language (BM) through new innovative studies to attract foreign students to come and study in the language.

Former Dean of the Faculty of Islamic Studies of the National University of Malaysia (UKM), Prof Zakaria Stapa said through such efforts the international community will be encouraged to study BM in order to have access to the knowledge available in the language.

He was giving a lecture at a thanks giving ceremony in conjunction with the 42 anniversary of the establishment of UKM at the university mosque here today.

He said usage of the Malay language in UKM should be carried out seriously without any resentment nor the mixing of languages so as to sustain its image as a language of learning.

UKM since its setup has been able to establish itself as a seat of learning with the necessary infrastructure. It was now quite matured having some 10% of its 2000 academic staff being professors and has since its establishment produced a total of 146170 graduates.

He cautioned whether enough has been done to intrnationalised the learning in BM in line with the univerity’s vision and mission.

Prof Zakaria called on all UKM staffers to uphold the spirit of the establishment of the university alluding to the  struggles of the people and the Malay intellectuals since the beginning of the 20th century to establish the university to develop Malay as a language of learning.

While consolidating its position not only as a leading research university but an exemplary seat of learning, the philosophy behind its establishment should not be compromised, Prof Zakaria said.