Couples Urged To Check Their Thalassaemia Status Before Tying The Knot 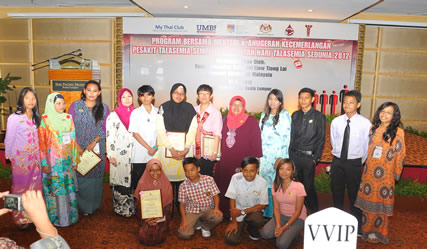 KUALA LUMPUR, 12 May 2012 – Couples who are carriers of the talassaemia genes faced the risk of having a child with the blood disorder who will require frequent blood transfusions.

Director of Medical Molecular Biology Institute (UMBI) of The National University of Malaysia (UKM), Prof Datuk Dr A Rahman A Jamal said if the spouse of a carrier is also a carrier than there is the risk of 1 in 4 of their child being born with thalassaemia.

Speaking at a luncheon in conjunction of the World Thalassaemia Day today at Hotel Seri Pacific here, he said knowing the carrier status helps couples in making choices in the future.

The event was anchored by UMBI in collaboration with the Federation of Malaysian Thalassaemia Societies (FTMS), Malaysian Society of Pediatric Haematology & Oncology (MASPHO) and The UKM Thalassaemia Club.

Thalasemia is an inherited disease which interferes with the formation of red blood cells. When this happens, there is not enough hemoglobin or red blood cells (anaemia) to carry oxygen around in the body.

Babies born with thalassaemia major will grow up needing frequent trips to the hospital for blood transfusions to keep them alive. They also needed to be treated for the side effects of blood transfusions which may damage their vital organs.

Prof A Rahman urged the public to go for screening just so they are aware of their carrier status.

Should the thalassaemia carriers couple decide to go ahead with marriage, then they should be responsible enough to seek pre-natal diagnosis because they know what they are up against. They needed to know that their yet to be born child might need a long term and frequent blood transfusions.

Blood transfusion has the risk of bringing extra iron into the body and if transfusions are regular, iron gradually accumulates and stored in certain organs, especially the liver, the heart, and the endocrine glands and in the end would damage the organs where the iron is deposited.

To maintain a safe level of iron in the body the patient has to take an iron chelator called Desferal. It is taken intravenously by injection but unlike other injections which consist of just a jab administering Desferal takes between 7 to 9 hours daily.

This is very strenuous on patients and some patients do not comply with this treatment which leads to complications of their organs.

Prof A Rahman said there is an oral substitute called Exjade, but the cost is three times more than Desferal. The dosage also depends on the weight of the patient. It would cost RM49,275 for a year’s supply of Exjade for a child weighing 25kg.

Hopefully the Ministry of Health will review the need for funding for the oral substitute of controlling the safe level of iron in a thalassaemic body, Prof A Rahman said.

Minister of Health, Dato’ Sri Liow Tiong Lai addressing the same function said: “In times of prosperity your friends know who you are and in times of adversity you really know who your friends are, and the Malaysian government is a friend to thalassaemic patients.”

He announced that the government has approved a fund of RM 80,993,700 for the Thalassaemia control programme which includes making the oral medication available to those who really need it especially children below 8 years.

He also stressed the importance of screening and the need for parents to make the right choice for the sake of the yet to be born innocent babies. Babies have the right to have themselves protected from inheriting defective genes when it can be avoided.