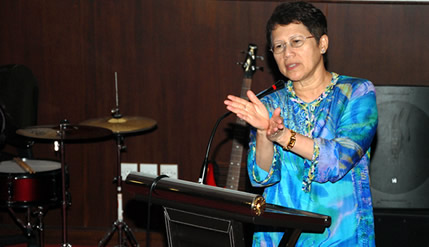 The Rector of UNPAD, Prof Ir Dr Ganjar Kurnia described the award as another effort to bring closer the two universities as Prof Sharifah is now recognized as a new family member of UNPAD.

He  conveyed this in two pantuns delivered at the closing of the ceremony yesterday:

(UNPAD is happy to have a new member, and  with the award UNPAD and UKM will have a closer relationship)

Academic relations between the two universities started formally in 1985 with the Simposium Kebudayaan Indonesia-Malaysia (SKIM) which continues until today with each holding the symposium every two years. The last was held in UKM Bangi, early this year.

The closeness was shared by Prof Sharifah Hapsah who described this in the pantun below:

She said the academic network became closer with the cooperation in the field of medical doctor where between 40 to 50 medical undergraduate from UKM began their pre-clinical studies in UNPAD for three years followed  by clinical studies for another three years at the UKM Medical Faculty.

The programme which started seven years ago produced its first batch of 40 graduads at the 40th convocation recently.

There are now 130 students following the programme at the Medical Faculty in UNPAD. They were present at a meeting to meet Prof Sharifah Hapsah at the Faculty Auditorium in city of Bandung last night.

Prof Sharifah advised the Malaysian undergraduates to mix with the local people to understand their culture and lives of the Bandung people.

While studying, they should also be friendly to their university colleagues and local population in order to understand their culture and society.

Such understanding is important as a good doctor must be able to interact with patients and their family.

She said UKM wants its graduands to be not only a good doctor but also has a global mind.