Academic Freedom Comes With Its Own code 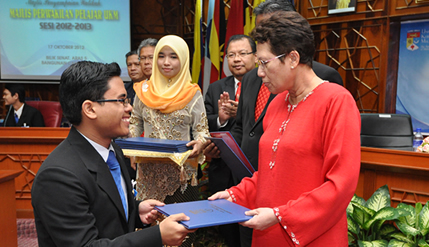 BANGI, 17 Oct 2012 – The National University of Malaysia’s students have been reminded that academic freedom comes with a code of conduct and to be courteous and disciplined.

Prof Sharifah Hapsah said academic freedom should also not be misinterpreted as the right to defame, insult, blackmail, intimidate or force others to believe in certain ideals.

She called on members of the council to inform students that they are all subjected to the laws and regulations that are already in place.

They must abide by them whether in the university or in the country as the rules were established to ensure the safety of all and not just for one group.

Academic freedom nourishes creativity and innovation. Without the freedom to think one cannot be creative and this creativity is what nourishes institutions and the nation, she said.

“You can speak, you can give your opinions but based on your research. After you have done your research and been thorough in getting information then you make your conclusion. You dare to say it and will not be afraid or feel threatened when questioned but are able to defend your stand. That is academic freedom,”  Prof Sharifah Hapsah said. 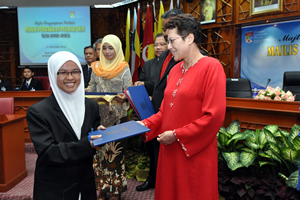 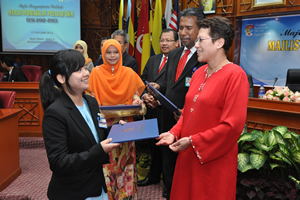 Students must also show their sincerity reminding the council members that as students representatives any action they make must be done in the context of UKM being a public university financed by the government with money from the taxpayers.

She said “the public pay taxes and the government gives money to us. That money runs the university and it also subsidises all the students. That is why fee paid by the students are small because it is heavily subsidised”.

Such support from the government and the community creates a responsibility to the community, a social contract to fulfill the community’s desire, which is to have human capital or talent, that is knowledgeable, competent, courteous and with integrity.

“All of that makes an intellectual. Without it, the community will not respect you, no matter how smart you are,” she said.