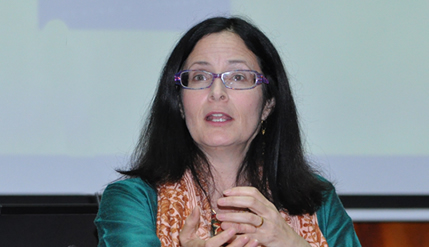 BANGI, 9 Oct 2012 – The negative international image of the Arabs and Muslims as violent, intolerant and out of control people has been attributed to films continuously churned out by Hollywood.

A visiting professor from California State University, Prof Dr Sophia Pandya said Hollywood has for decades been producing and distributing films depicting a very bad image of the Arabs and Muslims for the global market.

Speaking at a discourse jointly organised by the Institute of West Asian Studies (IKRAB) and the Institute of Islam Hadhari (HADHARI) and the Turkish Dialogue Society here today, she said such negative portrayal had been made from the very beginning from cartoons like Aladdin to blockbuster movies.

Arabs are portrayed as a subhuman barbaric and a threat to be feared by western society. This dehumanising of the Arabs and Muslims has nurtured hatred for them by the Americans for a long time.

What is sad is that Muslims themselves support Hollywood by buying and watching those movies that portray Muslims in a preposterous manner.

Muslim watch it because the image portrayed was so far off the mark, that Muslims think it is silly and is not about them. Yet this fictionalised image of Arabs and Muslims is taken as fact by non Muslims and the West, she said.

She referred to a groundbreaking documentary on how Hollywood have been slandering Arabs and Muslim for decades, Reel Bad Arabs- How Hollywood Vilifies People by Jack Shaheen.

The documentary is a compilation from about one thousand films with racist remarks demeaning the Arabs. Such remarks if made against the Jews or African Americans can cause an uproar, she said.

Prof Pandya said Hollywood inherited the blatant racist portrayal of the Arabs and Muslims from the Europeans who used to colonise the Arab region in the Middle East and North Africa.

The colonial powers were on a quest for raw materials during the industrial revolution leading them to systematically robbed countries out of their resources.

Debates in the British parliament then depicted the Arabs as people who deserved to be colonised, occupied and controlled even if it involves violence.

Thus the perception that Arabs and Muslims are bad people who deserved everything that is done to them is deeply rooted and entrenched in western perceptions. Though such image is a gross injustice it continues unabated and will keep on, Prof Pandya said.

She quoted Martin Luther King’s idea on peace “peace is not the absence of tension but it is the presence of justice”. Justice has not been done to the Muslims and Arabs, Prof Pandya said.

Present at the talk was the Director of Islam Hadhari, Prof Dato’ Dr Mohd Yusof Hj Othman, academic staff and the public.