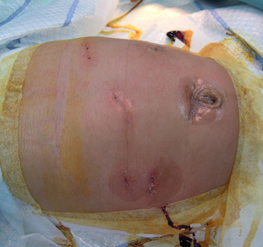 BANGI, 1 Oct 2012 – The laparosopic surgery or minimally invasive surgery but more commonly known as ‘keyhole surgery’ performed by Consultant Pediatric Surgeon at UKM Medical Centre, Dr. Dayang Anita Abdul Aziz in Aug last year on a 14 day old infant has been described as one of the highlights of the technological advancements in the field of modern medicine.

Dr Edwin Hord, a Technical Writer with Helium mentioned three technologies developed in the past two decades that have introduced drastic changes in the way pioneers in surgery meet the needs of some of their more unique patients.

He cited them as anesthesiology which had allowed for most of the major surgical advancements in recent years, minimally invasive surgery (keyhole surgery) which requires only small incisions for surgery and robotic assisted surgery.

Touching on ‘keyhole surgery’ which enables a patient less painful recovery and less chance of infection, he cited the surgery performed by Dr Dayang Anita as history-making which highlights the technological advancements and benefits of the revolutionary procedure.

He said while the procedures themselves are not particularly new, the technological developments during the past two decades have been impressive.

Dr Dayang Anita, the Head of Paediatric Surgery at UKM Medical Centre in Cheras performed the surgery on a 14 day old infant in Aug 2011 to remove 95 percent of his pancreas, making this the first surgery of its kind in the world for patients under the age of 30 days. 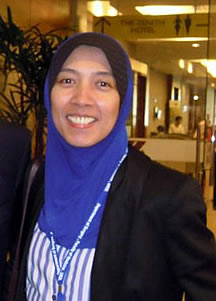 Dr Hord wrote: “The patient’s pancreas was producing excess insulin causing the blood glucose to drop, resulting in a hypoglycemic state. If not controlled, this could result in brain damage or death. The patient was not only unique because of his age, but also he did not respond to any medications that would reduce his insulin output. The only choice left was surgery, and in this case, the best choice was laparoscopic, or keyhole surgery.”

He went on to describe the surgery performed by Dr. Dayang Anita who started by inserting a small laparoscopic camera through the child’s navel so that she could view the pancreas on a high definition screen.

“She then inserted the necessary surgical instruments through a small incision, less than 3mm in length, on either side of the abdomen. With the help of the high definition images, she proceeded to cut the pancreas into small pieces, removing each piece one at a time. She describes the procedure as being like “building a ship in a bottle with tiny tweezers.”

The procedure took over two and one half hours and was a total success. The patient has since gone back home. “He is doing so well,” says Dr Dayang, “that he will not need any follow up treatment until he is four months old,” Dr Hord said in his writeup in Helium, a website carrying items on modern advancement in the field of medicine.

Dr Hord has a PhD in Curriculum and Instruction from the University of Wisconsin and has served at NASA’s Man Systems Division at the Johnson Space Center in Houston, Texas for 16 years.