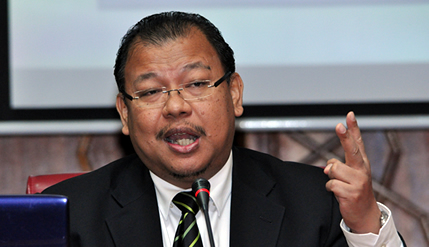 BANGI, 5 Oct 2012 – Malaysia should move towards generating greater domestic economic activities with more jobs created by home-grown industries so as to be less dependent on Foreign Direct Investments (FDI).

This was the consensus arrived at an economic forum discussing the 2013 budget, at the National University of Malaysia (UKM) here today.

The panellists were made up of Professor Datuk Dr Noor Azlan Ghazali, who is Head of Economics and Management Cluster, National Council of Professors; Datuk Dr Denison Jayasooria, Principal Research Fellow, Institute of Ethnic Studies (KITA) and Professor Dr Mohd Fauzi Jani, the Director of the Centre for Entrepreneurship and SMEs Development, (UKM-CESMED ). It was moderated by Prof Dr Mansor Jusoh of the Faculty of Economics and Management.

The panellists at the forum concurred that Malaysia’s economy is small and open and is thus vulnerable to global downturns because it is dependent on international trade. They also acknowledged that measures to generate investments should be directed towards domestic Small and Medium Enterprises (SMEs).

Prof Datuk Dr Noor Azlan who is also Deputy Vice-Chancellor (Academic and International Affairs) UKM said he had been tracking the country’s growth since 1989 and found that it corresponded with global trends. As such Malaysia’s economic activities has not been spared by the world’s financial crisis.

This was the first economic forum organised by the Dato’ Onn residential College on the recently-tabled 2013 Budget titledFostering UKM Denizens to be Responsive to the Economy.

Prof Noor Azlan, explained that in order to brace for future economic downturns, the government would have to introduce more trickle-down policies to help the people.

He said Malaysia’s future economic sustainability is largely dependent on our ability to maintain growth momentum, which he forecast for this year to be about 5.8% – somewhat lower than the 6.0% predicted by the government.

The best that Malaysia can do to prepare for such cycles is by practising prudence in spending during tough times, Prof Noor Azlan said.

He said global uncertainties and domestic growth were some of the issues that the country will continue to face next year. Since it may be difficult to attract more foreign investments, the country should move towards generating its own domestic activities.

Prof Fauzi, in turn, proposed that universities help generate the much-needed internal investments by being involved in agriculture through the small and medium-sized industries (SMEs).

He was concerned that farming has been neglected in recent years resulting in the ballooning of Malaysia’s food import bill.

He praised Prime Minister and Finance Minister, Datuk Seri Najib Tun Razak for allocating RM1 billion for SMEs to help reduce the budget deficit in anticipation of a decline in foreign direct investment.

He said the pain most felt by consumers is the rising food prices linked to imports. Ordinary people are worried that their salaries cannot match with rising prices despite government trying to allay such fears.

Prof Fauzi predicted that another European downturn related to the United States’ deficit problem will hit in 2013 and spread to the rest of the world.

China may be the country that will best weather the downturn due to its huge reserves, indicated by the fact that Chinese sovereign wealth funds had helped to bail out the American economy by buying US bonds two years ago, Prof Fauzi said.

Panellist, Datuk Dr Denison, who is also a Human Rights activist, said the ordinary people would certainly appreciate the one-off hand-outs announced in the budget to ease their present hardships.

However, he expressed concern that the gap between the haves and have not’s is growing saying that the rift is getting wider than ever.

Datuk Dr Denison also said that a lot of money could have been saved in the past if there had been serious moves to clamp down on graft and inefficiencies in the government.