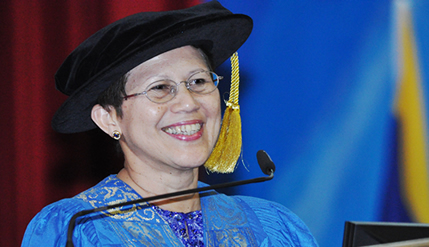 BANGI, 21 Oct 2012 – Efforts of The National University of Malaysia (UKM) to instill entrepreneurial qualities in all its students have shown positive results.

One example is a female Science and Technology (FST) graduate who is the CEO of one of its start up companies, Serotech Sdn. Bhd. which has successfully marketed Chili Bangi internationally. Another graduate also from FST has successfully launched an internet company.

She said these are testimonies that UKM not only produces graduates who are knowledgeable but are capable of starting and running companies which are technologically based.

Prof Sharifah Hapsah said UKM endeavors to provide a knowledge ecosystem that will bring out the best qualities in its students and where they will be trained in all aspects to become an all rounder.

Other examples she gave include a third year Actuarial Science students, Enn Choo Choon who won a prestigious scholarship  from John Culver Woody in America. The scholarship was given to outstanding students from reputable universities.