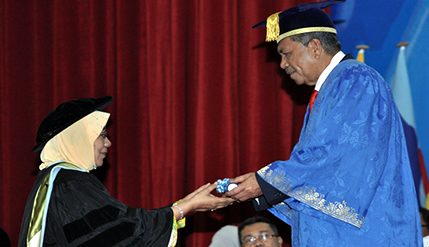 BANGI, 23 Oct, 2012 – The key to reforms of higher education lies in the attitude of lecturers and a balanced university curriculum which can help graduates to find employment.

Stressing the role of lecturers, an education personality at The National University of Malaysia (UKM), Professor Dr Robiah Sidin said lecturers should be willing to change to embrace new and more positive outlook.

They should also use teaching methods that would make it easier for students to learn, she said after her conferment as a Professor Emerita from UKM Pro-Chancellor, Tun Ahmad Sarji Abdul Hamid at the 8th and last session of the university 40th Convocation today.

She said undergraduates should be offered courses that enable them to pursue professional careers and thus weakness of  undergraduates in English needed to be addressed quickly so that they would not be adversely affected to clinch good occupation.

She felt universities should do more to help mould mature and productive individuals while trying to develop their potential  intellect and social consciousness to respect the Arts, Aesthetics and cultural heritage.

Universities should imbue students with the desire to be self-sufficient while having the sense of mutual tolerance of domestic cultures. Such traits will help shape the academic activities and social interactions in the campus.

In the course of her research, she met thousands of students who were very bright, alert and passionate about studying.

Starting with a Diploma in Education from the University of Malaya in 1963 followed by a teaching stint at secondary school level in 1966, she later became a student officer at Malaysia Hall in London in 1968. Her first post at UKM was as a tutor in 1972 where she remained and made a professor in 1993.

While at UKM she earned a scholarship from Ohio University and UKM to study for her PhD.

In UKM Prof Robiah served in various administrative positions including Dean of the Faculty of Education and Principal Fellow at the Institute of Malay World and Civilization (ATMA) in 2008 where she emerged as a prominent educationist.