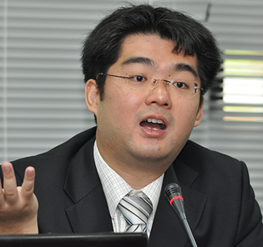 Singaporean free-lance tutor of Western Classics, Tai Yu Hsiang said even present-day geniuses like Albert Einstein and Mark Zuckerberg the founder of Facebook have credited their interest in the Greek or Latin Classics in inspiring them to think “outside the box”.

Tai was giving a public lecture on The Importance of the Latin and Ancient Greek Languages in Occidental Studies, organised by The Institute of Occidental Studies (IKON) of the National University of Malaysia (UKM) today.

He said that even the Arab, North African and Central Asian scientists of the 7th to 12th centuries AD translated the works of Aristotle, Plato, Socrates, Zeno and Ptolemy among others to Arabic and Persian so that their compatriots could learn from the ancient Greek philosophers.

Tai explained that after studying Greek mathematicians and philosophers, the Muslim scientists then went on to make discoveries of their own.

For example, Ibn Sina or Avicenna, the scientist, philosopher and physician, acknowledged the debt he owed to Aristotle, the Greek thinker who dabbled in many astronomy, physics, medicine and even alchemy. Ibn Sina wrote The Canon of Medicine in the 11th century which was also adopted in the West.

The Syrian philosopher and mechanical engineer known as Al-Jazari in the 12th century read works on Greek philosopher Zeno in both the original Greek and Latin. Al-Jazari was also interested in the inventions of Hero of Alexander, who Westerners claimed to have described the principles of the steam engine. Al-Jazari went on to invent the windmill and water-wheel long before Westerners used the technology.

Tai said in the West during the last 400 years, philosophers such as Isaac Newton, Galileo Galilee and Rene Des Cartes studied Greek and Latin works and wrote in those languages about Mathematics and Logic. Tai said in the West, there was a time when all scholars and practitioners of natural sciences had to learn Greek and Latin to be able to read from the ancient treatises.

Hundreds of years later Albert Einstein did likewise. Einstein publicly declared Greek and Latin as his inspiration for the 1st Theory of Relativity.

The classical influence persists until today even in the digital age, Tai said. Mark Elliot Zuckerberg, better known as Mark Zuckerberg is an American computer programmer and Internet entrepreneur who co-founded the social networking site Facebook. Zuckerberg, chairman and chief executive of Facebook, Inc, has often cited his knowledge of Greek and Latin for his interest in computers.

Tai was awarded a Masters of Arts in Greek and Latin by the University of Glasgow, Britain. His first degree was in Information Technology, from the same university.