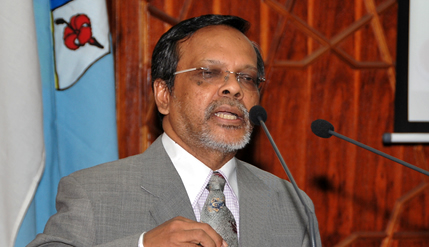 BANGI, 20 September 2012 – Muslims must formulate an approach to counter the influence of Post Modernism that could threaten Islamic values, especially among followers of the Sunnah Wal-Jammah in Malaysia.

Professor Zakaria Stapa from the Faculty of Islamic Studies, The National University of Malaysia (UKM) said the Post-Modernists in the West, better known as liberalists encourage a lifestyle especially among youths and children that lowers their self-esteem.

He said the notion of liberalism assumes that there is no absolute truth and that fact can interchange with falsehood. So, what is right now may be false in the future.

Prof Zakaria was delivering his keynote address on Challenges of Post Modernism against the Sunni Muslim creed, at the 2012 National Seminar on Faith in UKM today. The seminar was launched by UKM Deputy Vice-Chancellor (Academic and International Affairs) Prof Datuk Dr Noor Azlan Ghazali. More than 30 participants presented their papers in the one-day seminar.

An advisor to the National Fatwa Council, Prof Zakaria said Post Modernism’s influence is creeping into society through media such as printed materials, television and the Internet, without the public being aware.

The influence appears as entertainment, recreation, music and video games. In fact, they even take the form of documentaries from the West that can weaken the morals of the faithful.

He said it has become increasingly difficult to determine what is appropriate viewing as many TV programmes and information from the internet are passed on as educational materials but have hidden messages.

At times such subversive messages can easily be weeded out when they are so blatantly anti-Islamic that it inflames Muslims worldwide.

Unfortunately most of such subversive messages passed through undetected and appear in media channels, Prof Zakaria said.

More worrisome is the effort to convince the public that principles such as morality and ethics have relative values which is that what is sinful in the old days, can become acceptable now because when times change people also change.

These changes are channeled through the media swiftly to convey the message that globalisation turns the world into a “Global Village”.

Prof Zakaria said there are several organisations in the United States trying to corrupt the morals of the Islamic community through a bias view of news and what is claimed as Human Rights. These organisations side with rebel groups in Muslim countries to foment civil war, like what we see happening now.

Professor Zakaria was born in Tanah Merah, Kelantan in 1951 and received his early education at the Al-Ihsan religious school in Kota Baru, Kelantan and the Klang Islamic College. He obtained his first degree from UKM and a doctorate from the University of Durham, UK.