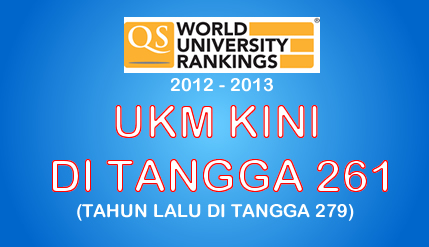 BANGI, 11 Sept 2012 – The National University of Malaysia (UKM) has moved up 18 notches in the World Rankings for Universities, from 279 to 261 as compiled by Quacquarelli Symonds Ltd (QS) World University Rankings 2012/3.

UKM had made methodological adjustments to improve the ranking system and she was happy that the university had made improvements in the two areas where it had ranked poorly before that is in citation and employer reputation.

“Our intense effort to achieve excellence in research is beginning to show results in the citations. However this is only the beginning and everyone must continue to embrace the research university culture by demonstrating academic excellence on academic platforms such as publications in reputable journals.

“Looking at the subject rankings, more efforts must be made in the social sciences and natural sciences where the rankings dropped this year, compared to the rise in Engineering and Technology as well as Life Sciences and Medicine.

UKM, she said, should be congratulated for achieving the performance despite being the only research university to receive substantial budget cut last year.

Unlike UM and USM, UKM did not get additional funds over and above the funding given to all research universities expressing the hope that it will be rewarded in the coming budget  “as we have shown we have the grit to persevere and produce these results”.

With more funding we can be better, she said.

The Massachusetts Institute of Technology of USA topped the QS World University Rankings this year followed by Cambridge University of Britain and Harvard University also of USA.