Waste From Nuclear Reactors Will Be A Trans-boundary Pollution Issue 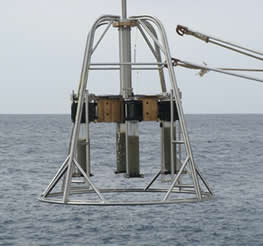 BANGI, 5 Sept 2012 – By late 2020 countries such as Thailand, Malaysia and Indonesia intend to operate nuclear reactors as an alternative energy source.

Some radionuclide produced during such operation will enter the marine ecosystem through the water cooling process. This will affect most neighbouring coastal waters, said Prof Dr Che Abd Rahim Mohamed from the School of Environmental and Natural Resources Sciences, Faculty of Science and Technology, The National University of Malaysia (UKM).

He said that the contamination level of anthropogenic radionuclides in the world’s seas and oceans is the result of human activities.

Radionuclide is an atom with an unstable nucleus which is created by excess energy. This radionuclide will undergo radioactive decay where gamma rays or sub atomic particles are released making them radioactive which can be harmful if the safe level is exceeded.

Contamination of the marine ecosystem from numerous underground nuclear testing especially in the Pacific islands has not been well documented. The French government supported research by the International Atomic Energy Agency (IAEA) in the South Pacific to assess the potential impact of 147 underground nuclear tests undertaken by France in the Mururoa and Fangataufa Atolls of French Polynesia.

Globally more than 520 atmospheric nuclear weapon tests were conducted between 1945 and 1980 by the United States and the former USSR; while the United Kingdom, France and the People’s Republic of China are the primary contamination source of anthropogenic radionuclide.

Prof Che Rahim, who obtained his PhD (Marine Geo-Radiochemistry), from Hokkaido University, Japan, in 1996 said additional radionuclide is a further burden on the marine ecosystem after this existing nuclear waste has already been buried into ocean systems. 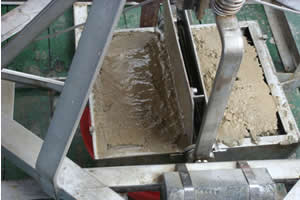 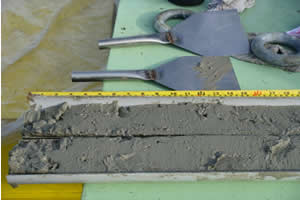 Few studies have been undertaken in the North Pacific, although that void may be addressed by current investigations of radionuclides in marine biota near three American test sites at Amchitka, Alaska where underground detonations were performed in the late 1960s and early 1970s.

Besides Malaysia, Thailand and Indonesia, Singapore, Brunei, Vietnam, Cambodia and Philippines have recently discussed intentions to develop the use nuclear power to supplement national electricity supplies.

“During a nuclear reactor’s operation, most effluents containing artificial and natural radioisotopes are discharged into marine environments, and the monsoon will distribute this effluent to other countries in the South China Sea Basin thus bringing about the trans-boundary pollution.

A recent investigation on seafood carried out before the Fukushima, Japan tsunami incident by The Hong Kong Observatory clearly shows that artificial radionuclides such as plutonium-239, tritium, strontium-90, carbon-14, iodine-131, cesium-137 and potassium-40 were found at positive concentration levels.

There were no significant differences in Cs-137 activities whether on the surface or at bottom from water samples taken with readings at the 95% confidence level. The activity of Cs-137 was found to be in the range of 1.47 to 3.36 Bq/m3 and 1.69 to 3.32 Bq/m3 for both Sabah and Sarawak, respectively. 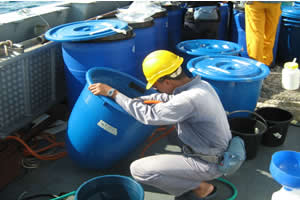 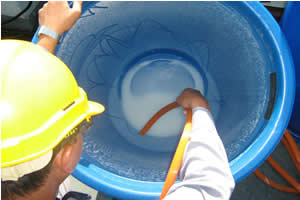 Prof Che Rahim said a study was conducted based on data published by national and international scientists which were collected to analyse the current status of radionuclides in the South China Sea Basin.

In the 2008 research, Prof Che Rahim was assisted by graduate students from the Land-Atmospheric-Ocean Interaction (LAOI) group of the Marine Science Programme, Faculty of Science and Technology, UKM. Staff of the Malaysian Nuclear Agency (MNA), were also involved.

It was found that activity concentrations of those radionuclides in the surface sediment vary depending on sampling location and it was proven by an ANOVA analysis that showed a significant difference at the 95% confidence level for activities of 210Po and 226Ra in the southern South China Sea.

Some areas containing high activity concentrations of radium could be due to the result of natural enrichment of radium especially areas rich in petroleum sources. 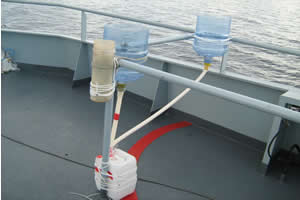 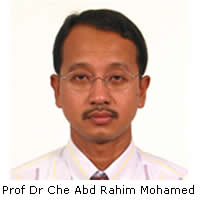 The concentration activities of 210Po were slightly more than 100 Bq/kg at all the stations and contradicted that of cockles (less than 100 Bg/kg).This was due to the feeding habits of zooplankton, where grazing zooplanktons have the ability to concentrate 210Po than 210Pb from the particulate during ingestion and absorb it into digestive organs. Furthermore, zooplanktons are able to repackage nuclides into feacal pellets.

Concentrations of both nuclides found in zooplanktons were slightly higher compared to those in cockles, and this suggests that most nuclides especially 210Po and 210Pb deposited into the sea as rain or aerosol was used by a first producer such as zooplankton then deposited onto the seabed as settling particles and used by a second producer such as benthos (i.e., cockles).

(Bq kg-1 is the dry weight or Bq/kg dry weight is bequarel unit used to show the concentration in a kilogram dry weight during research.

(mBq/L is isotope bequarel milli in a one liter of sample taken during research. Kg,mg,g or ton showed that research samples are solids ie sedimeny, soil, fish and others while liter, milliter, meter cube showed the samples are liquids).

Concentrations of 210Pb were three to four times lower than concentrations of 210Po. This is due to the fact that 210Pb reveals a stronger tendency to be sorbed on mineral suspended matter but during this study a slight statistical correlation between 210Po and 210Pb was plotted (r2 = 0.9347) in zooplankton tissues but did not appear for cockles.

This occured for coastal zooplankton in particular because coastal water has direct or indirect input from land and accumulates in the zooplankton’s body during daily biological processes. Previous measurements of 210Po and 210Pb in pelagic seawater showed that biological uptake maybe also be more important than inorganic absorption for 210Po scavenging, while the opposite appears to be the case for 210Pb.

This could also be seen from the species of Pampus argenteus, where smaller fish had higher concentrations of 210Po. Such differences in the levels of radioactivity in different species of fish might be explained by differences in metabolism rates and feeding patterns.

Fish with high 210Po activity are those that feed on fecal pellets or organic particulates that are rich in 210Po, and/or predators feeding on 210Po-rich prey, for example Cynoglossus marcolepidotus. But varied concentrations of 210Po were observed for pelagic fishes such as Alute mate, Pampus argenteus and Sillago sihama. This could be due to their habit of obtaining food from the water column which contained relatively less 210Po activity.

Data on biota in the Asia-Pacific Marine Radioactivity Database (ASPAMARD) indicates that the concentration of 137Cs in fish muscle and whole fish were observed to range from 0.02 to 2 Bq/kg wet weight with a median of 0.2 Bq/kg wet weight.

Two Japanese researchers Nagaya and Nakamura observed that 137Cs concentration was recorded at the highest concentration in muscle, followed in decreasing order by viscera, gills, digestive tract and the skin of fish. According to Yamada and Nagaya, 137Cs levels in marine biota have decreased almost exponentially with time.

Again, this may be a result, at least in part, of decreasing concentrations of 137Cs in regional seas due to radioactive decay. Changes in 137Cs activity concentration in marine biota were also monitored over a 10-year period in the Yellow Sea and the Bohai Sea of China and a decreasing trend with time was also observed.

Nagaya and Nakamura further observed that 137Cs concentration in fish did not differ significantly if the fish were from shallow waters or deep bottom waters. The average values obtained suggest a concentration factor of 100 for 137Cs in fish.

However, since 137Cs activity concentrations are lower in deep bottom waters, it is conceivable that the concentration factor for bottom-water fish may be higher than for shallow-water fish.

(137Cs or Cesium-137 comes from nuclear reactors that can be used for about 30.7 years and it is released into the marine system during the Fukushima tragedy recently. 210Po or Polonium-210 only survived for 143 days are natural radionuclides derived from decayed uranium dan released through the burning of forest or burning of coal).

How is the transboundary of radioisotopes an international issue?

Prof Che Rahim said nuclear industries are vigorous, comprehensive and modern. However, potential problems with safety, environment or proliferation have raised a number of concerns. These may be related to the nuclear facilities, material control and regional environmental protection.

This means that the concept of regional collaboration to monitor airborne radiation levels is important. This concept should include the development of regional capabilities to monitor environmental safety and to support regional emergency preparedness.

This approach to building nuclear cooperation may be feasible because the countries of ASEAN have the necessary technologies in place for their own internal environmental monitoring programs.