The Hadith Must Be A Guide for Muslims 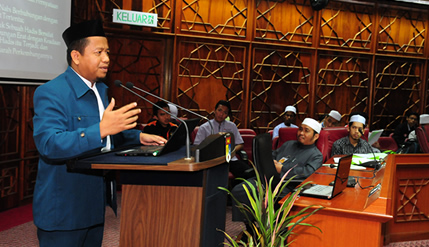 BANGI, 9 Dec 2013 – The Hadith should always be a guide for Muslims, second only to the Quran without any doubt.

Participants of a one-day international seminar on Revealed Knowledge and Heritage at The National University of Malaysia (UKM) here today, said the Hadith – a collection of deeds and sayings of the prophet Muhammad (PBUH) – should be seen as a guide on how to lead one’s life with the prophet as the role model.

They, however, said that caution should be exercised in interpreting the sayings, as many Muslims today are misrepresenting or even misunderstanding the Hadith.

The seminar was organised by the faculty of Islamic Studies (FPI) and Institute of Islam Hadhari (HADHARI) UKM.

In her welcoming remarks, the organising chairman, Dr Tengku Intan Zarina Tengku Puji called for the setting up of a national institute of Hadith studies to coordinate all efforts in disseminating knowledge about the book.

She said there had been too many doubts cast on the veracity of the Hadith leading some to become ‘Anti-Hadith’.

Prof Arifuddin said “when the prophet said you must train for warfare by practising with a bow and arrow, does this mean that you must follow to the letter what he did?”

He said Muslims have to carry out their duties just like the prophet told them to do using the technology that is available today just as the prophet did with what was accessible to him in his day.

Prof Arifuddin cited the prophet’s call to fight for fellow Muslims in other lands saying that it did not mean that Muslims outside Palestine needed to personally go there to take up arms to fight against Israel. It would be better for them to aid their brethren in the holy land by contributing to the Palestinian cause in cash or kind.

Dr Ahmad Yunus warned about the Anti-Hadith movement , which he claimed was gaining ground in Malaysia. In his paperAnti-Hadith and the Liberal Islam Network, he urged the government to fight to the last all elements that reject the Hadith as a viable source of Islamic teaching.

He also called on the public to be wary of organisations who purported to be Islamic and yet are espousing Western liberalism instead of the true teachings.

Dr Ahmad Yunus said such groups often use slogans such as ‘renewal of Islam’, and were influenced by Western orientalists who are not sympathetic to Islam at all. In Malaysia writers such as Kassim Ahmad have been at the forefront of the Anti-Hadith movement, he said.

Assoc Prof Muhd Najib linked the Lesbian, Gay, Bisexual and Transgender movement ( LGBT) to moral decay in Malaysia. He said the Hadith and the Quran clearly states that such people should be punished.

He explained that other than the Quran, the Hadith states that homosexual acts (sodomy and al-sihaq) and transgender women  acting like men and men like women (al-mutasyabbih), are committing grave sins.

However Islamic jurists’ opinion about sodomy as a sexual offense, differ in punishments, he said.